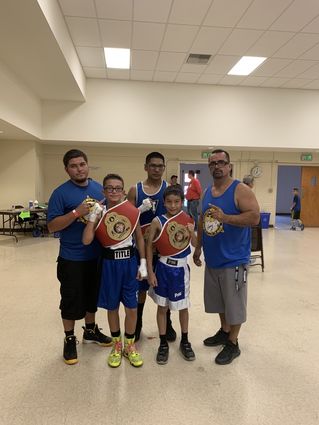 The Shafter Veterans Hall was the site of a big amateur boxing event recently, attracting competitors from all over California, and even as far away as Arizona.

Twenty-eight bouts were on the card, in a sanctioned event that also attracted a well-known referee from Arizona, who made the trip just to officiate.

The Shafter Boxing Club started out years ago in the garage of Mike Ayon's house, as he wanted a place to teach kids a skill and help keep them off the streets. The small club has now grown into a large club with a training facility, putting the city of Shafter on the boxing map. Ayon and his staff of volunteers have produced several local, regional, state, and even national champions.

This event had 56 boxers competing in various weight classes. Boxers of all skill levels participated, from national caliber competitors to novices, such as Eli Cisneros of the Kern County Boxing Club. Cisneros made his debut a memorable one with a victory over Jose Medina of the San Joaquin Boxing Club. Cisneros said, "I have been boxing for about seven months. This was my first fight."

Ayon said that the event is sanctioned by the United States Boxing Association. It is scored using an Olympic-style system that is widely used in sanctioned tournaments. Eight boxers from the Shafter Boxing Club were in action on Saturday. Alexa Zagal, 10, fought Brianna Varela of the Aleman Boxing Club in Fresno.

Eight-year-old Cruz Montoya went up against Isaac Escoto, also from the Aleman Boxing Club. Ivan Garcia Jr. fought against Juan Vidrio in a battle of 9-year-olds. Vidrio fights out of the Dethrone Boxing Club, also located in Fresno.

Octavian Maldonado fought Elijah Campos of the Visalia Boxing Club in the 57-61 lb. division. Brandy Ortega, 11, fighting in the 74-79 lb. division, went up against Evelyn Gomez of the Hanford Boxing Club. Madellyne Martinez, 10, fought Kassandra Castellano of the Vaya con Dios Boxing Club in Tulare. Martinez has won a national title, as well as several local and regional titles. 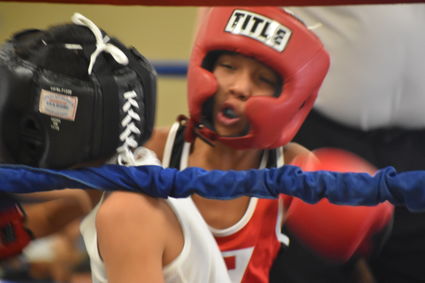 The tournament drew boxers from all over the state, as well as Arizona.

Nine-year-old Loreno Mendez competed in the 52-56 lb. division against Joseph Martinez of the Haro Bros Boxing Club out of Merced. Thirteen-year-old Miguel Gonzalez of Shafter fought Jesus Rodriguez of the Emmanuel Boxing Club in Porterville. Four of the eight boxers from Shafter won their bouts. Brandy Ortega, Miguel "Mikey" Gonzalez, Octavian Maldonado, and Alejandro "Alex" Salazar were the winners on the team in this tournament.

Ayon said the tournament was a success, with a number of the bouts featuring competitors that will meet each other again on the state or even national level. Ayon and company are preparing for their next tournament, which will be a championship-level competition that attracts boxers from all over the country.