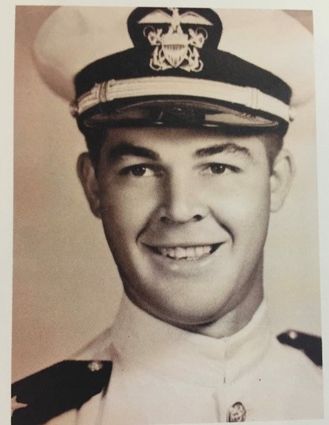 Wiedmann after his enlistment in the Navy.

This story was written for a California State University, Bakersfield, class assignment by Arnold Martinez, who grew up in Shafter.

In today's fast paced world, it's easy to forget the major events that took place in the mid-20th century which changed the world forever. There are several estimates as far as the death tolls are concerned, but experts agree that the totals were between 65 million and 95 million worldwide, including civilians. History has been my passion since I was a boy; I've been described by people who are closest to me as being an "old soul." I spent my days from elementary through high school listening to Bing Crosby, Dean Martin and Frank Sinatra, as opposed to rap or alternative, which most kids my age listened to.

I grew up in Shafter. Although many people do not know it, Shafter played a crucial role training combat pilots during World War II. Minter Air Field in Shafter was used as a training facility by the United States Army Air Corps, and pilots were trained in anything from Vultee B-13 Valiant to Lockheed P-38 Lightnings. There are people from Shafter who played a very important role in our nation's noble cause during the war; their service was unselfish, brave and should never be forgotten.

I have read (literally) hundreds of books relating to World War II, but I had never actually interviewed a World War II Veteran. My father-in-law set up an "interview" between myself and a man he knew who grew up in Shafter, named Merton Lynn Wiedmann.

The single word "nervous" does not even begin to describe the way that I felt when I arrived at his front door; the amount of respect and admiration that I have for Our Greatest Generation cannot be put into words. I shook hands with Mert, introduced myself and tried to calm my nerves before asking him any questions. He must have noticed how nervous I was, because he initiated the conversation as I scrambled through my papers, looking for a proper question to ask him.

Before I even asked the first question, I must have cleared my throat three or four times. Mert immediately told me not to be nervous, that we were "just friends, talking." The instant that he said those words, I felt a huge relief, and I felt like I was chatting with a lifelong friend. I told him that I held all veterans in high regard, but World War II veterans are in a separate place of their own. I could easily write a book and try to explain the admiration and respect that I have for these men, but I'm afraid that even a book would not be enough to get my message across. To me, the men and women of America's Greatest Generation are truly unique. I eventually settled down, and what I thought was going to be a 15-minute interview, turned into a 3-hour-long conversation (one of the greatest conversations I've ever had).

Mert was born on April 16, 1924, in Shafter, where he went to school and worked in the farming fields as a young boy. He explained to me that he was not of any privilege, and the entire family worked hard to earn money, just to get by. Mert was a 17-year-old senior at Shafter High School when he heard the news of the devastating attack on Pearl Harbor by the Empire of Japan on Sunday, Dec. 7, 1941. It amazed me to hear him say that on Dec. 8 the entire student body at Shafter High School was in the gymnasium for a general assembly listening to the radio broadcast when President Franklin Delano Roosevelt declared war on the Empire of Japan. Some high school students would only go to school half of the day and go to work in the fields the other half, to earn money for their families. Mert was the president of the student body at Shafter High School and graduated in June of 1942. He enlisted in the Navy on Dec. 7, 1942, exactly one year after the attack on Pearl Harbor.

A lot had happened in a year; on Dec. 11, 1941, Nazi Germany and Fascist Italy declared war on the United States, siding with the Japan Empire. The Japanese had been advancing in the Pacific, and gaining momentum through May of 1942. On May 4-8, 1942, the Battle of the Coral Sea took place East of New Guinea. This was a decisive battle, and it changed the tide in the Pacific in favor of the Allies. Although the Japanese sank more ships than they lost, it was a strategic victory for the Allies, because it was the first time that a major Japanese assault had been stopped. Two Japanese fleet carriers were knocked out of the fight, Zuikaku and Shokaku; one was sunk and the other was badly damaged. The loss of these carriers was a huge blow for the Imperial Navy; it would greatly impact the outcome of the Battle of Midway, June 3-7, 1942. During the Battle of Midway, the skies were controlled by American planes, because the Japanese Navy had lost two of their aircraft carriers a month before at the Battle of the Coral Sea. The Battle of Midway was the turning point in the Pacific War; our Navy lost the carrier Yorktown and a destroyer, the Japanese Navy lost all four of its aircraft carriers, the Akagi, Kaga, Hiryu and Soryu, as well as a cruiser. On Aug. 7, 1942 the Guadalcanal Campaign began, and was still in progress, when Mert enlisted in the Navy.

Mert was sent to the University of Notre Dame for training. Some of the training that Mert received was in meteorology, intended to be used in the Pacific Theater. The Typhoon of 1944 was a tropical cyclone that hit the U.S. Pacific Fleet in December of 1944. The winds of the cyclone were said to have been over 100 mph. Over 790 American sailors were killed, three destroyers were sunk, nine war ships were damaged and over 100 aircraft were wrecked or blown overboard. Admiral Chester W. Nimitz described the results of the typhoon as "a more crippling blow to the Third Fleet than it might be expected to suffer in anything less than a major action."

After his training at Notre Dame, Mert flew to Point Barrow, Alaska. Things were very different in the 1940s, and technology was not nearly as advanced as it is today. Some of the missions that Mert had to go on were extremely dangerous, but necessary. In order for a meteorologist to know when and where the next powerful typhoon would be, they had to fly into it! On these flights, they would fly as low as 1,000 feet over the ocean, into the heart of the typhoons. This was a very brave act, and Mert did it on multiple occasions, with hopes of preventing disasters like the Typhoon of 1944.

Mert explained to me, very humbly, that he had a job to do, and he knew the dangers behind typhoon reconnaissance, so he simply performed his duty, which also included decoding orders. One of the planes that he flew in was a Consolidated PB4Y-2 Privateer, which is extremely similar to the B-24. Typically there were 12 people aboard, 11 were the flight crew, and a Navy officer. Six of these Hurricane hunting aircraft (PB4Y-2) were lost at sea during the 1940s and 1950s. Mert mentioned to me that he actually met Admiral Chester W. Nimitz in Guam; he was very humble about it and told me he doesn't think Admiral Nimitz would have remembered meeting him, but that the Admiral commended Mert on a great job that he was doing. He mentioned that even though Admiral Nimitz may not have thought much about it, Mert never forgot it. Admiral Nimitz is one of the most famous admirals in American history.

Another duty that Mert had while deployed was helping censor letters. Because of this he had to read some "Dear John" letters, which must have been very difficult. Not all of the stories Mert told me were sad; he mentioned a funny story (that I will not repeat here for the sake of my grade!) regarding a "latrine," which was a bathroom (pretty much benches with holes) that the men would use to relieve themselves. Mert's stories included the bread on the islands having weevils and finding trucks full of beer that the Marines had buried on the beaches. Some of the islands had over 10,000 Marines on them. One of the islands that Mert was on was part of the famous islands of Eniwetok Atoll, where nuclear tests were later performed.

On V-E Day, May 8, 1945, the day that Nazi Germany surrendered to the Allied forces, Mert was on a reconnaissance flight over the Pacific when he received the news. On V-J Day, Aug. 14, 1945, the Empire of Japan surrendered to the Allies. Two atomic bombs were dropped on Hiroshima and Nagasaki, and the costliest war in human history was finally over. Mert was flying over an island in the Pacific when he received the news of the surrender of the Japan. The war was over. Mert had performed his duty and had served our country proudly; it was finally time to come home, and he was flown into San Diego.

Mert attended the University of Southern California, where he graduated in 1949. He was married in 1944 to Patricia "Pat" Stringham -- her father was the owner of Stringham's Drugs in Shafter. Mert took ownership of the drug store on Jan. 20, 1949. He owned it for 56 years, which is twice my age! At the time that he sold it, it was the oldest drug store owned by one family in the entire state of California. Men like Mert make me proud to be able to say that I grew up in Shafter. Mert served his country, raised his family and gave back to his community. 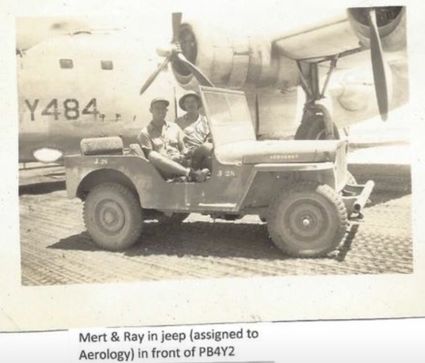 Mert Wiedmann and Ray in Jeep in front of a PB4Y2 plane.

After speaking with Mert, I got a much better understanding of the type of men that served our country during those difficult years. Mert is a simple man; he was not brought up with money, and he worked hard in the fields to earn a living. He served his country overseas, came home and raised his family, earned his education, and gave back to his community for over 56 years. I think his persona characterizes the many men and women of America's Greatest Generation, who answered the call of duty and served our nation in a time of great peril. I will quote U.S. Marine Eugene B. Sledge from his memoir, "With the Old Breed: At Peleliu and Okinawa,": "If the country is good enough to live in, it's good enough to fight for. With privilege goes responsibility."

The last question that I asked Mert was, "How do you see America in the future, and what needs to change?" he answered, "We were allowed to work after school, and ended up just fine; it seems like people don't want kids to work nowadays."