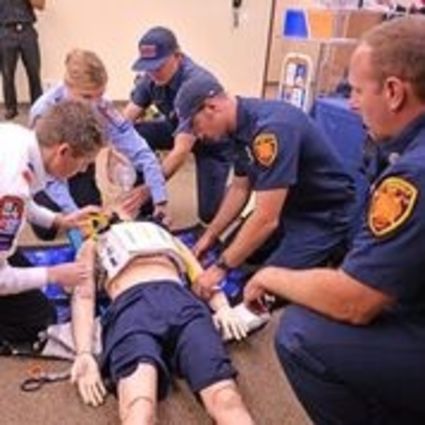 Hall Ambulance Service announced details recently about its implementation of the new ZOLL Autopulse, making it the largest deployment in North America.

“This system will save many more lives than using manual CPR, allowing the blood flow to increase to about 30 percent to the brain,” said Bryan Pank, senior EMS account executive with ZOLL Medical Corp.

The new systems have been placed into service on each Hall Ambulance Life Support and Basic Life Support ambulance in its 9-1-1 response area, including Shafter, Wasco and most of the rest of Kern County.

The device will also be carried on-board Hall Critical Care Transport’s ground units. The ZOLL AutoPulse Resuscitation System helps to improve blood flow to the heart and brain during SCA because of the unique, high-quality chest compression it generates compared to manual CPR. “With the AutoPulse deployed, using the LifeBand, you are going to be able to push near normal blood flow very quickly. It is consistent and constant,” Pank said.

Over 600 EMS workers and first responders took part in one of the 67 comprehensive training sessions which took place over 10 days in July, including members of the Kern County Fire Department, as well as Hall Ambulance employees. Chris Leons, manager of Hall Critical Care Transport, said, “We wanted to bring in the fire departments so that we are a cohesive team as we work together on scene of a cardiac arrest patient.”

The Hall Ambulance employees are excited to be a part of this new innovation and are looking forward to a greater survival rate in critical care cardiac patients. The local fire departments are equally excited to be on board with the training of high-performance CPR and now with the AutoPulse. Chief Anthong Galagaza of the Kern County Fire Department commented, “As the Bakersfield city fire chief, I find it absolutely critical that we can train anytime with Kern County Fire Department and at any time with Hall Ambulance,” commenting on the amicable relationship that exists between the two entities. “To have that continuous high-performance, CPR and this joint training is critical for the simple fact that this is just better for the citizens of Kern County.”

Sudden cardiac arrest is a substantial health problem, killing approximately 350,000 persons each year in the U.S. and Canada. It is the leading cause of unexpected death in the world.

Survival is poor in most communities, at less than 10%, and improvements in resuscitation practices could save as many as half of these victims.