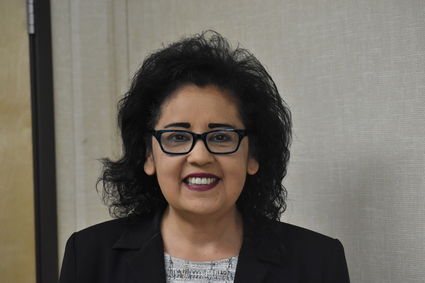 Rosa Romero has been in the Richland School District for 30 years.

The Richland School District is in the process of finding a new superintendent after the resignation of Dago Garcia at the end of last school year. In the interim, Rosa Romero has been named interim superintendent of the district.

Romero, until recently, was pulling double duty as the principal of Richland Junior High and filling the superintendent's position as well. Romero said, "Just before the school year started we hired Francisca Garcia to fill the principal's position on a temporary basis." Garcia is a long-time educator who worked for the district for many years as a teacher and administrator. "I actually worked under Francisca when I first started at Richland," Romero said.

The interim superintendent said that the Richland School Board is now in discussions in their search for a new superintendent, looking for the right fit for the district.

"It has been a crazy three months," said Romero.

When asked what, if any, improvements had been made since the big changes that occurred over a year ago when the majority of the administrators were reassigned, Romero said, "I really don't know why the changes were done, but we have adjusted. Change in anything is difficult, but we have made strides and work for our ultimate goal to give the children a quality education."

Romero started in 1989 as a teacher and taught for five years before beginning her career in administration. Since then, Romero has served at several different positions in the district, including being head of the migrant program, director of curriculum and instruction, and principal of Redwood Elementary School, among others.

The next superintendent will face not only the challenges of improving on test scores and keeping the district moving forward, he or she also will have the challenge of a shrinking budget. When asked what impact the presence of Grimmway Academy has had on the district, Romero said, "First, it is the numbers. We operate and receive monies on how many students we have. The impact has been a major hit to our numbers, and as a result, we are looking at having to cut staff. There will be some difficult decisions to be made because the numbers are not there. When numbers are down, we have to make those decisions to cut staff, including teachers and maybe even staff on the administrative level."

The district was looking at cutting programs in their LCAP a couple of years ago, but Romero said that programs such as CHAMPS, an after-school program that has helped many students in their educational careers, are grant-funded, so they will stay in place. "We also still have the opportunity to give every student a free lunch, with no need for any paperwork or economic requirements."

Romero said that she will work hard while she is in her current position to help the district thrive and put together a plan that might carry over into the next administration.