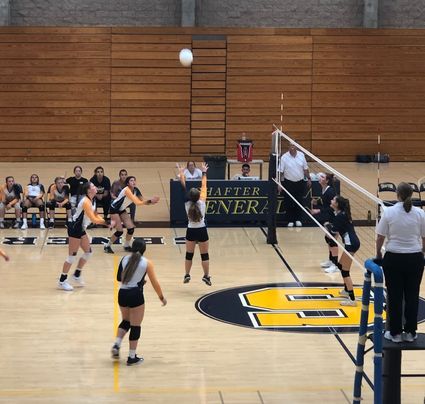 The Lady Generals set up for a spike.

The Shafter Generals football team opened their season on Friday night with a victory over Mira Monte High and the rest of the Shafter High Generals sports teams got underway as well, with the volleyball teams splitting their matches and the cross country teams with solid outings.

The Lady Generals volleyball team opened their season with a loss to North High School, but followed the defeat with a four-set victory over the Broncos of Kern Valley.

The team had a solid season last year and have some valuable members returning for this season. With the maturity and experience that was gained from last year, this year's edition should have a very productive season. Among the top returners are Frenchie Santos, Alleigh Hanner, Kalissa Bloemhof, Alicia Pompa and Makena Knapp.

In the Kern Valley contest, the Lady Generals dropped the first set by a score of 26-24, but fought back to tie the match with a second set victory, 28-26. Shafter overcame an 11 point deficit in the next set that saw the Lady Generals win by a two-point margin. Shafter closed out the Broncos in the fourth set, securing the victory. Shafter will be in action on Thursday at West High before competing in a tournament at East High School over the weekend. 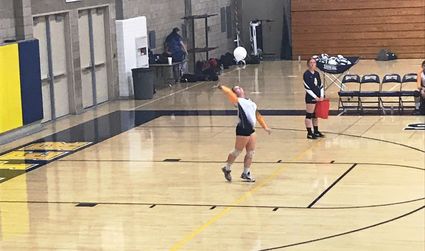 The Boys and Girls cross country teams started their seasons with solid showings at the McLane Invitational in Fresno on Saturday. The boys team, led by Raymond Matta, who finished with a time of 18:51, good for 34th place individually, placed ninth as a team in the event. This was four places above rival Wasco in the final standings.

On the girls side, the Lady Generals placed 10th out of 23 teams, with Katie Hernandez and Stephanie Ledezma placing 38th and 39th respectively.

This weekend will see both teams in action again. This time, they will be competing at the McFarland USA Invitational. This competition attracts some of the strongest teams in the Valley. With both teams having such success in recent years, especially in the last 8 to 10 years, the cross country teams were forced into ever higher divisions, where they are competing against schools that are two to three times larger in population than they are. This is a challenge but also shows what strides the Generals have made on the cross country map in the Central Valley.