Focus is on community connections 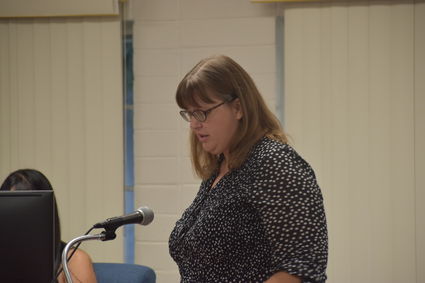 Melissa Bergen of Listen to Shafter speaks to the council.

Chief Kevin Zimmermann had looked for authorization to hire the officers "to better serve the community."

"These are excellent additions to a department that has already been lauded throughout the county recently," Interim City Manager James Zervis said.

Shafter was reported as the safest community in Kern County by BackgroundCheck.com, a human resources website. The site conducted an analysis of crime statistics that found Shafter was the 73rd safest city in the state of those with at least 10,000 residents. This was the top city in Kern County, according to Zimmermann.

The move to expand the Police Department will cost the city about $393,000 a year, with a one-time cost of equipment, such as vehicles, of about $312,000. The funds will come from a general fund surplus of $789,000 created by unexpected sales tax collections, Zervis said.

Chief Zimmermann said that the four positions will be two patrol officers, one dedicated traffic officer and one dedicated community relations officer. The last will be in charge of public relations with the community, as well as helping the department get some programs back in operation, such as the Police Activities League and the Citizens Patrol Units.

Mayor Gilbert Alvarado suggested that the new hires be allocated as two dedicated traffic officers and two patrol officers, with the community relations function distributed among officers instead of one dedicated to the job.

Ultimately, it was a unanimous decision to approve the new positions. The proposal came on the heels of comments by the mayor. In a recent interview with [BEGIN ITAL]The Press,[END ITAL] Alvarado said, "I don't know if it is a hiring issue or what, but there seems to be a need for more police presence in the community. There needs to be more involvement between officers and the community." 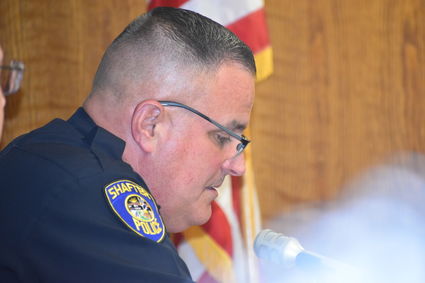 Chief Kevin Zimmermann tells the council of the plans for the department's future.

The action brings the department to a total sworn force of 33.

In other city action, Melissa Bergen and Katie Wiebe introduced their organization, Listen to Shafter, to the council. This organization has been involved in several public service projects, including Little Free Libraries of Shafter and the Shafter Christmas Store.

Information on the group is available at ListentoShafter.org.