App offers inside look at crimefighting 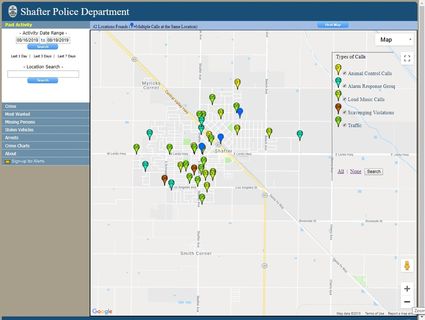 A view of the map on the city's website, courtesy of the CitizenRIMS application.

For those interested in how Shafter is fighting crime on a daily basis, there is a valuable tool that can give residents a peek into what is going on in their city, even their neighborhood.

At the urging of Chief of Police Kevin Zimmermann, the Shafter Police Department added a functional tool for the Shafter community to access crime activities and other police-related data in an effort to continue the Police Department's transparency and accountability efforts.

The department utilizes a computer-aided dispatch and records management program, the Records Information Management System, or RIMS. This program was implemented over 10 years ago and captures all the call activities by the police. There are a number of add-ons the department purchased in order to make broad use of RIMS capabilities. For example, one add-on, Mobile RIM, allows for the officers in the field to access the data system in their patrol vehicles through the use of a laptop.

Chief Zimmermann recognized that although officers may be efficient and effective in the field, the ability to keep the community apprised of situations which may have occurred in their neighborhoods could be enhanced with this added feature, bringing greater transparency and notification.

"The ability for the community to know and see what may be occurring in their community is important to a lot of people who contact the chief," according to police Captain Jeff Bell. "Both myself and Captain [Carol] Burnett, the department's operations captain], receive calls constantly from members of the community and local businesses wanting to know what is going on down their street, or something that they had heard about occurring somewhere else in the city."

The interest in criminal activities in the city isn't anything new. Upon first being appointed chief, one of his first priorities was to create greater awareness and transparency with the community.

"Instead of waiting for quarterly reports, or information that may be posted inside the police lobby, is just made sense to the chief to put information virtually immediately into the hands of the community we serve," Bell said.

He also said that those who are interested don't even have to take the time to go to the internet. "If they want, they can sign up for alerts. The site allows anyone to sign up for alerts, which will provide them with an email notification either daily or weekly for specific information types the person may be interested in," Bell continued. Bell said that you simply have to provide an email, and the program will automatically send a notification -- usually in the morning -- of any of the particular alert types chosen by the user.

"It is a closed feature to us, and it really wouldn't matter anyway. Everyone is entitled to the information, and we do our best to ensure that confidential information or that which might jeopardize a case are not released by the program."

But, Bell said, "it will give a pretty fair picture of what is going on overall in the city."

The CitizenRIMS is accessed by going to the city website (at Shafter.com) and then choosing the Police Department portion of the site. Once there, the viewer would select the chief of police tab and then department reports to get to the link.

A brief welcome page will open, and from there the program opens to a map of the city core showing a variety of colored balloons which identify the most recent activity, usually within the last few days.

Viewers can select or deselect on the opening page from five types of past activity: Animal Control calls, alarm responses, loud music, scavenging, and traffic related activities. Viewers can also click on any of the balloons and a brief amount of information will display such as dispositions and an incident number.

If you were interested in Animal Control calls since January, or the amount of loud noise calls in a certain neighborhood, this might be a problem. The amount of information is limited, and it will not display more than the last 500 records of any one specific category. If someone were interested in more information, a request to the Police Department would have to be made.

The mapping is also adjustable; the map can be enlarged to the Gossamer Grove area or zoom in on any other area of the city.

Aside from past activity, CitizenRIMS provided users with additional general crime information that displays eleven types of crimes that have occurred in the city, again within specified date ranges. Users can also view posted "Wanted" notices for individuals wanted in connection with specific cases, missing persons, stolen vehicles and recent arrests.

For those who like a long-term picture of crime in Shafter, CitizenRIMS also provides a very basic Crime Charts link which displays general crime comparisons of what is considered "major crime categories" as reported to the FBI.

Bell said that if anyone has questions on the data or would like some help understanding what they are seeing, he is available by phone. "I am always more than willing to help walk folks through this information. Although I think it is pretty clear, there may be questions that remain and I always enjoy helping our community." He can be contacted at [email protected] or 661-746-8914.