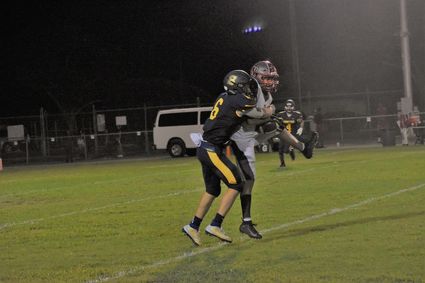 The Shafter Generals dropped to 1-2 after a tough loss to Bakersfield's North High Stars 27-13, going below .500 for the first time in two years. The young Generals fought just as hard against themselves as they did against the Stars. Shafter had numerous mental mistakes and miscues, resulting in bad field position and stalled drives.

Sophomore quarterback Tyson Dozhier continued his struggles to lead the Generals to sustained drives. Dozhier ended the game 8-24 passing, throwing for 121 yards, the majority of them on a 52-yard touchdown play that started as a screen pass to Leo Fernandez, with Fernandez finding a path to the endzone. The Stars took a 7-0 lead on their first drive of the game. North made it 10-0 with a 32 yard field goal just four minutes later after a General turnover.

It was 10-7 after Jiet Sanchez's touchdown, getting the Generals right back in the game. But, the Stars extended the lead again when they connected on a long pass play after Shafter had forced North into a third down and long situation. For the first time this year, the Generals defense was dominated on the line of scrimmage. The Stars managed three or four yards on average, the Generals never able to stop the Stars at the line of scrimmage. Shafter was unable to shore up the corners and were repeatedly beat on the outside as the Stars' running backs turned the corner on their sweeps for first downs and more. 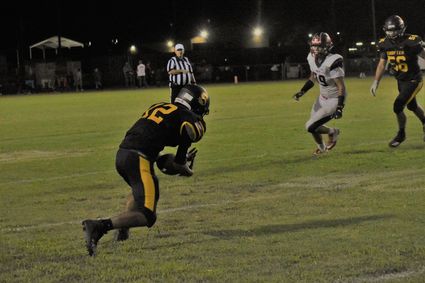 Leo Fernandez takes a pass from Dozhier and scores on a 52 yard play.

The Stars also used the Generals' overeagerness at the line to occasionally run right by the linemen as they rushed up the middle. Right before the half, the Stars tacked on a 34 yard field goal, making the halftime score 27-7.

The Shafter faithful were hopeful after the Generals narrowed the gap to 27-13 when they scored on a 6 yard touchdown pass from Dozhier to Joey Sanchez with 9:10 to go in the game. But, unlike the first two weeks, the Generals defense was

unable to make a stand and get a stop. North seemed to be able to get just enough yards to keep the drives alive and eat up the time on the clock.

Shafter had a last-ditch effort with a few minutes left in the game but was unable to convert on a fourth down with four yards to go, giving the Stars the ball. North was able to run out the clock to end the game

The Generals will hit the road on Friday night, traveling to Atascadero, trying to even the their record at 2-2.