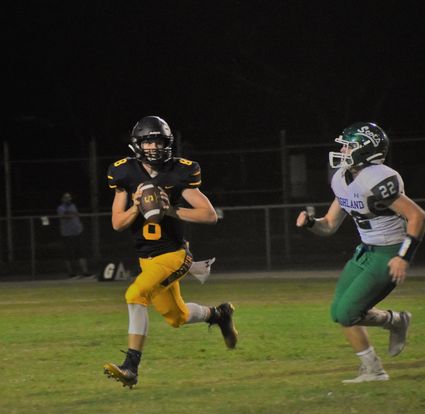 The Shafter High Generals lost a regular season game for the first time in over a year as a rally against the Scots of Highland High came up just short, 22-16. The Generals spotted the Scots a big lead midway through the second quarter as the Generals offense just could not get anything going in the first half.

The Scots opened the scoring on their second possession. The General defense stopped the Scots on their first drive, forcing them to punt. But, the Generals gave the ball right back to Highland with a three-and-out series, a pattern that emerged in the first half as the General offense, for the second week in a row, had trouble moving the ball and keeping possession of it.

The Generals had three three-and out series in the first half, as well as two turnovers. The Scots first score came when they started with a short field as a result of a good kick return, giving the Scots the ball on the Generals 25-yard line. A blown coverage resulted in a touchdown for the Scots.

On their next possession, Shafter faced a fourth-and-long situation deep in their own end of the field. After a mishandled snap, the punt was blocked into the Scots' endzone, resulting in a safety for the Scots, making the score 9-0.

It looked like the Generals were back in the game early in the second quarter when they managed a couple of first downs, giving them the ball on the Highland side of the field. But, the drive ended after a couple of miscues that resulted in a forced punt. Late in the first half, trying to keep the deficit in single digits, the Generals gave up a late touchdown with the clock winding down, going down at the half by a 16-0 score.

The second half saw the Generals offense getting a couple of impressive drives, the first one resulting in a 28-yard field goal, cutting the Highland lead to 16-3. Shafter's defense, who were impressive for the majority of the game, gave the offense the ball back on the next series after an interception at the goal line prevented the Scots from extending their lead. A quick slant pass to Sebastion Montgomery resulted in Shafter's first touchdown of the game, making the score 16-10. 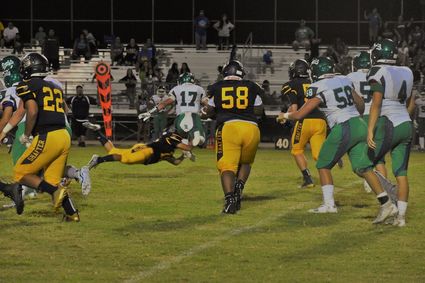 Joey Sanchez lays out to take a back down for a loss.

Shafter will continue their homestand when they host the North High Stars on Friday night at 7 p.m.