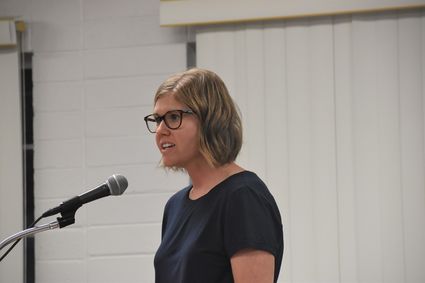 Katie Wiebe thanked the council for help in the Walk and Chalk event.

The City Council approved a sewer project that will connect the city's sewer system to the housing development at Gossamer Grove.

They authorized the city engineer to award a construction contract to Floyd Johnston Construction Co., with a price of up to $2.9 million for the city's share of the project cost.

The Southeast Shafter Sewer Extension has been broken up into two phases.

Phase I will be funded by the city. This phase covers the system section that goes from Santa Fe Hwy to Zerker Road, a two-mile stretch of pipeline. This cost is included in the 2019-2020 budget.

Phase II of the project will be funded privately, with the majority coming from Lennar Homes.

Since the original construction, the Gossamer Grove development has been serviced by the North of the River Sewer System. An agreement was reached between North of the River, the city and Lennar Homes for sewer services to be provided to the homeowners in the development until the year 2027 or a volume limit based on the number of homes being serviced, about 1,500.

There are now over 400 homes being serviced, with another 359 being offered in their next phase. According to Lennar Homes, the limit could be hit as soon as the end of 2020, so an alternative option has to be in place before the limit is reached.

In other actions, the council approved the firm of CPS HR Consulting to recruit for the position of city manager. The council approved a resolution that will authorize Acting City Manager Jim Zervis to spend up to $25,000 for their services. The company has extensive experience in recruiting management for a number of cities, including Hollister, Clayton, Columbia, Union City, Carson, Bell Gardens, East Palo Alto and Modesto. Their services include drafting a brochure for the position, recruiting, preliminary screening of candidates, interviews and background checks. The process also includes public meetings at various times to engage citizens in the recruitment process.

In a very positive public comment portion of the meeting, Melissa Bergen and Katie Wiebe thanked the council for their approval of their Walk the Chalk event held on Monday evening. The event drew over 70 people who helped create a variety of messages of hope, thanks and celebration to the community that were displayed in a series of chalk drawings on the sidewalks downtown Shafter.