'Wait and see' for Grimmway's plans 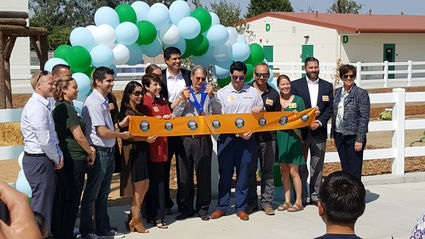 The ribbon cutting of Grimmway School in 2017.

New laws that were passed recently are meant to raise the accountability in California's charter schools, giving the local public school districts more control on decisions to allow a charter school in their district, as well as requiring charter schools to become more transparent in its operations.

Gov. Gavin Newsom earlier this year signed into law Senate Bill126, which requires charter schools to adhere to the same public records and open meeting laws as traditional district schools -- a bill that was previously passed, but vetoed by Gov. Jerry Brown, twice.

After a strike by the Los Angeles teacher's union in January of 2019, legislators fast-tracked the bill, and it was signed by Newsom.

Enter Assembly Bill 1505. This bill originally called for granting local school district sole power over authorizing charter schools in California, granting wide latitude to school boards over charter approvals and removing appeals to the county and state boards altogether. After negotiations, the bill was passed, giving the local school districts power to consider the impact of a charter school in their district would have, and also give them the power to deny the charter based on the district's finances, which was previously not allowed to be considered.

In the version that was passed, there are is an appeals pathway for those charters that are denied by their respective school districts. In a joint statement released recently, Newsom and Senate and State Assembly leaders said the "deal on AB105 significantly reforms the charter schools Act to address long-standing challenges for both school districts and charter schools."

There are also additional requirements in the laws that require charter schools teachers be required to hold some sort of state credential along with a background check, though uncredentialed charter teachers leading "non-core" classes would have five years to meet that requirement.

Asked what impact these new laws will have on their charter school, Grimmway Academy Principal Joanna Kendrick stated, "Well, we at Grimmway have always been on the conservative side right from the beginning. We have adhered to the public school guidelines regarding our hiring process, so we will not have to adjust anything in regards to that issue."

Kendrick said that they will have to wait and see other impacts the new laws will have. "We worked with Richland School District closely and were approved for our charter by the district. We will work with them moving forward as we have to go for a renewal of the agreement after five years."

Kendrick said that the school will keep adding a grade every year, until they are accepting students through the eighth grade, which will be in two years, when their charter is up for review. Asked if the laws have have an impact on plans to add another academy in Kern County or the surrounding area, Kendrick said, "We are just going to wait and see what comes of the issues and how they end up affecting our charter schools as they continue to operate and grow."