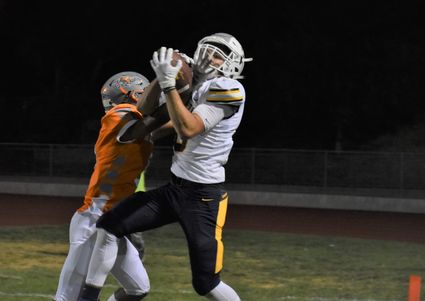 Jackson Sanchez catches his first touchdown of the season.

The Shafter Generals lost to the Atascadero Greyhounds in a game that displayed the youth and immaturity of this year's squad, dropping their record to 1-3 for the season.

The 28-8 loss ended a tripleheader, with all three Shafter teams in action. The freshman team played a tough game, with the teams taking turns scoring, before the Greyhounds took the lead for good late in the game, coming out on top. In the junior varsity game, it was a wild one, with both teams trading the lead several times.

Shafter took the lead at 20-14 after an impressive drive that ate up a lot of clock. But the lead lasted about 15 seconds, as the Greyhound returner took the ball to the endzone on the ensuing kickoff, tying the game at 20-20. Shafter took the lead back late in the game on a 22-yard touchdown run by Ledezma. The two-point conversion made the score 28-20. The Greyhounds had one more answer and looked to tie the game up with minutes left, after scoring a touchdown. But the Shafter defense came up big, denying the Greyhounds the two point conversion, giving the blue and gold the victory.

In the varsity game, Shafter's offense showed signs of things that might come, with a good series sprinkled in throughout, but they were few and far between, with all but one of the drives ultimately stopped by a turnover or a miscue. Sophomore quarterback Tyson Dozhier had a better passing game this week, with several passes connecting with senior Felix Chacon, or speedy Jackson Sanchez, who they are still trying to integrate into the offense after his return from injury.

The first quarter was scoreless, neither team finding a way to put points on the board. Midway through the second quarter, the Generals seemed to have the Greyhounds on their heels, with a long punt that pinned them back on their own six yard line. But. The Greyhounds took the ball 94 yards on the next play, taking a 7-0 lead.

The Generals answered right back in the last few minutes of the first half. Dozhier got a first down with a scramble, then hit Nick Aguirre on a pass to get a first and goal for Shafter. Dozhier then connected with Sanchez for a six-yard touchdown. The two point conversion gave the Generals an 8-7 lead. The Generals suffered a big setback in the last minute of the half when Atascadero scored on a 59-yard touchdown pass play to grab the lead back just before halftime. It was stunning for a couple of reasons. First, it was the second time in the game that the Generals' usually stingy defense gave up a long scoring play. Second, it was just as surprising that the Generals were playing a man defense with less than a minute to go in the half. Shafter went into the locker room behind by a score of 14-8. 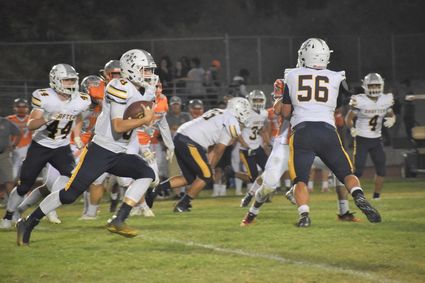 Tyson Dozhier runs for a first down.

In the second half, it was a frustrating one for the Shafter faithful. The Generals fell behind 20-8 when the Greyhounds scored on another pass play. Atascadero took any doubt of the outcome away late in the game when they tacked on an insurance score, making it 28-8. That score came on another miscue by the Generals' offense. Dozhier, who still has a habit of staring down his receivers, did just that and the Greyhound defender stepped in front of the receiver and took the ball the other way for a 60-yard pick-six.

Dozhier and company did have a better game than the previous week, with over 300 yards in total offense. They just still have trouble with being their own worst enemy, stopping themselves when the opposition doesn't.

The Generals will open league play on Friday night, hosting Cesar Chavez in their SSL opener at 7:30 p.m.