UPDATE: Generals even league record at 1-1 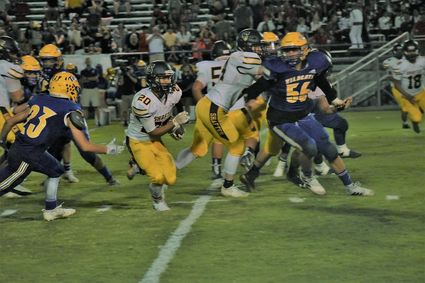 Nelson Hernandez gets a first down for the Generals.

The Shafter Generals evened their SSL record at 1-1 with a dominant victory over Taft High School 48-15 on Friday night. The Generals played their most complete game of the season as they excelled on both sides of the ball and also shined on special teams.

It was an entirely different team that has took the field the past few weeks, on a dimly lit field that even coach said "was playing by candlelight."

Sophomore quarterback Tyson Dozhier was injured in the third quarter of last week's game versus the Titans of Cesar Chavez. He was replaced with senior Jackson Sanchez. With Dozhier not dressed out for their game against the Wildcats, Sanchez took the field and led the Generals on an opening drive that didn't stop until Sanchez had found the end zone on a 12-yard touchdown run.

This team, now 2-4 for the seasn, was reenergized and looked hungry. The performance on the offensive side of the ball also gave the defense a new life, and those players were swarming and fighting to beat the Wildcats on the line of scrimmage.

With a mix of runs by Sanchez, Nelson Hernandez and Elisha Lucero, the Generals moved forward after the Shafter defense gave them the ball on a turnover deep in the Taft end of the field. Shafter took advantage of the field position and widened the gap to 13-0, with a run by Leo Fernandez.

The Generals made it 20-0 in the second quarter when Jackson Sanchez ran 41 yards for a touchdown, with Shafter going over the total yardage mark that they had for the previous week in total. Taft closed it to 20-7 with a short touchdown run with just over three minutes to go in the first half.

But that three minutes were more than enough time for Sanchez and company to light up the scoreboard one more time before the end of the half. With a completion to Felix Chacon, Sanchez ended the drive with a 12-yard touchdown run, giving the Generals a 27-7 lead at the half.

The evening had started off with a bang, with a very entertaining game between the Shafter Colonels and the Taft Bobcats. The Shafter junior varsity team was looking for their second win of the season. The game was a seesaw battle, with both squads taking turns mounting drives, only to have them stopped with a great defensive stand. Shafter took a 13-7 lead into the locker room, thanks to a touchdown late in the first half. In the second half, the Colonels found themselves behind by an 18-13 score after the Bobcats got a long drive that ended with a five-yard touchdown run with just a few minutes left in the game. 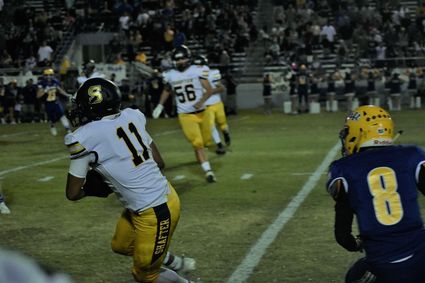 Joey Sanchez takes it in for six.

But the Colonels answered back with a strong drive of its own. The drive ended in the end zone, when the quarterback took the ball around the left side for a 43-yard touchdown run, closing the gap to 21-19. Shafter went for two points and got them, tying the score at 21-21. Unfortunately, the Colonels couldn't cash in on a turnover late in the game, allowing the Bobcats to escape with a 21-21 tie.

With Shafter playing such a strong game against Taft, it will be decision time Friday, Oct. 4, as the Generals look to go 2-1 in league in their homecoming game against the Cougars of McFarland. If Dozhier is healthy enough to play, will he get the nod or will Shafter go with the hot hand in Sanchez? The game starts at 7:30, with junior varsity action at 5 p.m