A day to meet Shafter's finest 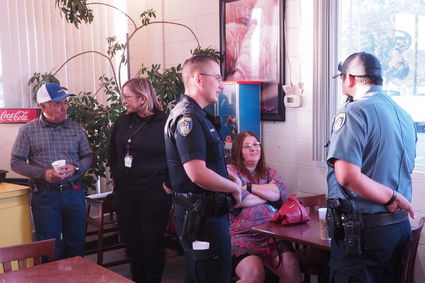 The Shafter Police Department celebrated National Coffee with a Cop Day with an event at Shafter Donuts recently. Several officers, including Police Chief Kevin Zimmermann, met with a number of Shafter residents discussing a wide variety of topics.

There was talk about the speeding problem in different neighborhoods, as well as problems some residents are having concerning crimes committed in residential areas

Enrique Hernandez attended the event and said that it was nice to be able to talk to the officers in a relaxed environment and get to know them a little bit. "A lot of the time, you just see the officers in their cars driving around, or have someone pulled over with their lights on. You really don't get a chance to put faces to the badges. This was really nice."

Chief Zimmermann said that events such as this are great because it allows the officers a chance to communicate with the citizens and also learn what they are concerned about and the questions that they might have for them.

One main topic of conversation was the hiring of four new officers that was approved by the City Council recently. "People were excited that we were getting four new officers. We also heard from several residents that they have noticed an increase in traffic violation enforcement," said Captain Diana Burnett of the Shafter Police Department.

"There were even a couple people who joking around about having to be a lot more careful with their driving," added Burnett. 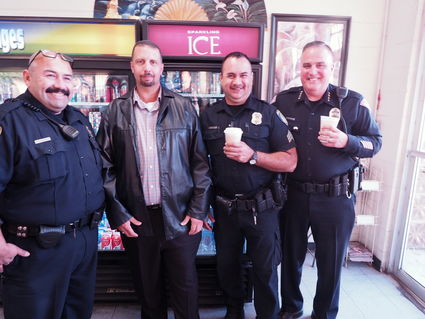 Coffee with a Cop was started by the Hawthorne Police Department in 2011 when officers were looking for ways to interact more successfully with the citizens that they serve each day. Community policing has long been considered a framework for establishing trust between the community and the police. However, over time the character and composition of communities have changed due to shifting demographics, more commuters and the introduction of different communication methods such as websites and social media.

Coffee with a Cop events are now held in all 50 states and is one of the most successful community oriented policing programs across the country.

The mission of the event is to break down the barriers between police officers and the citizens that they serve. Taking time to meet at neutral locations provides the opportunity for real conversations about issues that matter.

"There are no agendas, or speeches, just having some coffee and discussing issues that concern our public," Burnett said.