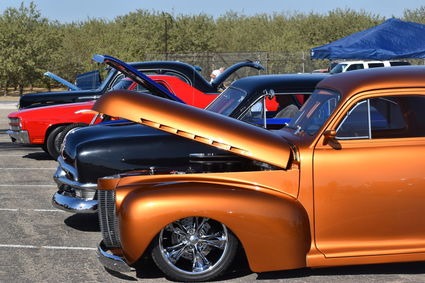 Classics were the stars of the show.

The Wasco/Shafter Elks Lodge held its third annual Blaine Willard Car Show on Saturday, with a large collection of classics and hot rods on display. Organizer Jerry Bozarth said the members of the lodge decided about three years ago to hold the event to remember their good friend and lodge brother, Blaine Willard.

There was much more than displayed cars at the event. There were also plenty of prizes raffled off and a silent auction with several items up for grabs, including a date-night package with movie tickets, drinks, snacks and other goodies, and a handmade metal tractor that drew a lot of interest.

Attendees also had the chance to participate in a cornhole tournament that pitted four-man teams against each other in a battle for a cash prize. Cornhole – similar to a beanbag toss -- has grown in popularity, and the event drew several players that came to show off their skills.

Classic oldies to compliment the classic cars could be heard during the event. The tunes brought participants back to their cruising days: one hand on the wheel and one around that special girl.

As for the stars of the show, there were several categories of competition: classics, hot rods, cars under construction and pickup trucks. Members of the Old Farts Car Club were on hand, as well as car enthusiasts from Shafter, Buttonwillow and the surrounding areas. Hoot Gibson of the OFCC was in attendance, as was Freeman Nixon and company with a gray hot rod. Trophies were doled out to the winners in each category. 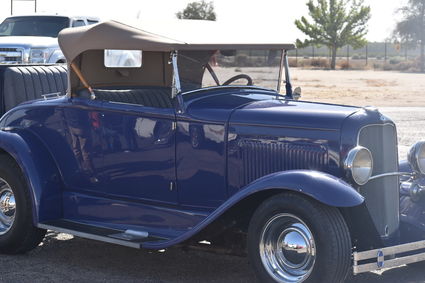 This car was Blaine Willard's showpiece. Blaine's family is always given the prime spot by the music stand.

Bozarth said the crowd size was down a little this year because there were such a number of events during the weekend, as well as an upcoming show this weekend as part of the Wasco Festival. "We still had a good number of cars, and the people had a good time."

The namesake of the event, Blaine Willard, was a lifelong member of the Wasco/Shafter Elks. Willard moved to Wasco in 1958 where he married Hazel. Together, they raised their daughter, Cindy, and son, Shane. Blaine was an active member of the communities of Wasco and Buttonwillow. He made many lifelong friends at the lodge and enjoyed fishing and working on about any kind of machinery, including cars.