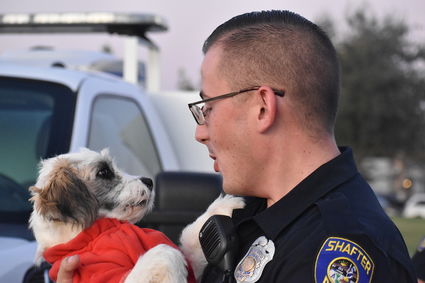 The residents of Shafter had a night out filled with good conversation and valuable information, thanks to the city’s finest.

The Shafter Police Department held the Police Night Out Tuesdayat Veterans Park. The event allowed the residents of Shafter to put faces to the badges.

The department is enjoying a productive year that has had them serving the safest community in Kern County, according to a recent report by Background.com. The force is also growing, with two new officer positions, and an officer dedicated to community relations and one to traffic.

Police Chief Kevin Zimmermann said that the event is important as it lets the residents of Shafter see that the department are more than just uniforms patrolling the streets. “We think that it is important that we connect with the citizens of the city, building a relationship with them that goes beyond a face and a badge.”

The event had the officers and administration displaying police vehicles so the residents could get an up-close look at the cruisers and see the sophisticated equipment that the department has at its disposal.

Cookies and snacks were provided by the Shafter Woman’s Club , and several families took advantage of the free child ID kits available, registering their children with the department. “It is important for the families to have that knowledge that they are that much more protected with their children already in our system if, God forbid, something should happen,” Zimmermann said. 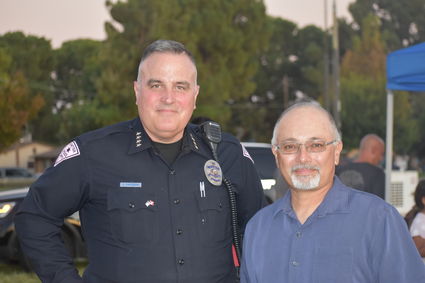 Parents in line were in agreement, including Ricardo Cardenas and his parents. Ricardo had fun as he helped the officer get his prints taken. The children were fingerprinted, stats recorded and put on file with the department.

In addition to officers, there were also staff from the Animal Control Department on hand with one of their residents ready for adoption. Animal Control Officer Nick Riddick had bags of goodies for pet owners including treats, dog food and coupons.

There was some friendly competition with attendees playing a game of cornhole. Captain Diana Burnett spent time talking to residents, including Don Loveless and Rich Arnell, who were relating stories from years past, as well as discussing current events.

The event, as evidenced by the large crowd, was one in a number of events intended to keep communication open between the department and the Shafter community.