Kennedy up this week 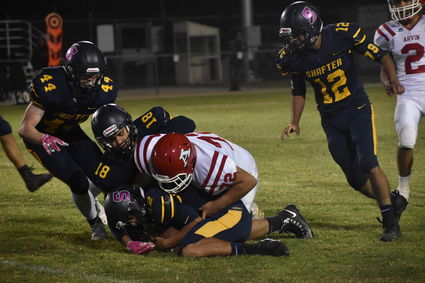 The Shafter Generals celebrated their Pink-Out Night with a whitewashing of the Arvin Bears by a 43-22 score Friday night.

Shafter continued their newfound success this season with a total team effort that saw the locals contribute in every phase of the game. The win brings their record to 4-4, and 3-1 in the South Sequoia League.

Shafter spotted the Bears 7-0 when Arvin scored on their first possession, using a series of misdirection and trick plays that ended with a 12-yard touchdown.

The Generals would answer right back with a drive led by quarterback Jackson Sanchez, who passed for a first down and finished off the drive with a 35-yard touchdown run. A two-point conversion gave the Generals an 8-7 lead.

The first few series on defense, the Generals struggled against an Arvin offense that kept them off balance, eating up chunks of yardage. The Bears took a 14-8 lead on the series when the General defender lost his footing and fell down, giving the Bear quarterback an easy target for a 74 -yard touchdown play.

Shafter took the lead right back when Leo Fernandez took the ensuing kickoff back 84 yards for a touchdown, making the score 15-14. After the Generals stopped the Bears on their next possession, Sanchez hooked up with Chris Lindsey for a 70-yard touchdown pass play, the second week in a row that Lindsey has caught a touchdown pass over 50 yards, giving the Generals a 22-14 lead.

Arvin tied the game late in the first half on a long drive in which Shafter had trouble stopping the Arvin running backs. The Generals' defense suffered on that drive with a series of mistackles after having the Bear runners seemingly stopped in the backfield. 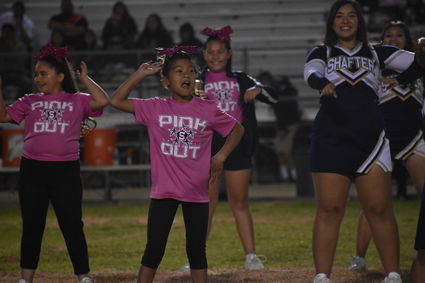 The Shafter General cheerleaders performed with some future cheerleaders who attended a clinic that was held last week.

In the second half of the game, the Generals' defense had figured out the Arvin offense, and the trickery of the Bears had worn out its welcome. In a crucial series, Arvin drove the ball down to the Shafter 3-yard line. The Generals stiffened and stopped the Bears on four straight plays, giving the offense the ball back. Shafter took the lead after the defense gave the offense the ball on a fumble recovery by Jesus Vargas. Nelson Hernandez ran the ball in from 23 yards out, giving the Generals a 29-22 lead.

Shafter would never look back after that score. They would go on to tack on two more scores, with Tyson Dozhier taking the helm for the majority of the second half, instead using Sanchez as a receiver, piling up the yardage on offense,including a 74-yarder from Dozhier to Sanchez, making the score 36-22. With under two minutes to go in the game, Dozhier would score on a 35-yard run, making the final score 43-22.

In preliminary action, the freshman team defeated Arvin 48-0 on Thursday, bringing their record to 3-1 and 2-0 in the SSL

Shafter will have this Friday off, giving them an extra week to prepare for a showdown with Kennedy High School in Delano, now 7-0.