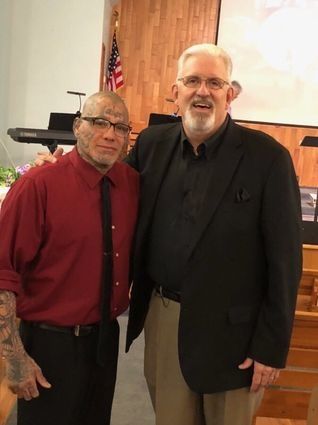 If you missed the evangelistic event last year at the First Southern Baptist Church in Shafter, you have a chance to be a part of the event this year as Raul Perez is returning to deliver his unique message to the city.

Perez will also be returning to Shafter High to talk to the students about his experiences, giving them a message of hope and faith. The event will take place on October 25-27, beginning at 7 p.m. each evening. Pastor Jim Neal said that Perez has a connection with the everyday person because he is not some high-and-mighty preacher, coming into town to dazzle the people with a lot of flashy talk. Perez is a humble man who knows where he came from and how blessed he is to be able to tell his story to an audience that can relate to him.

Perez said that he loves to tell his story and share with people how good God is and how anyone can be used by Him. "I will tell anyone who will listen how blessed I am and how much I love to help people and touch people's lives."

The band Set Free will also return to perform before Perez takes to the dais. The band plays a great mix of southern gospel, contemporary Christian music, and also perform several tunes that they have reworked from their original rock n roll versions.

Perez was raised in a broken home without a father, which led to what he calls bad choices and turning to the streets. Perez joined a gang very young and found love with similar minded individuals with the same type of background.

Perez started using drugs before he hit his teens, landing him in the juvenile system for the majority of his youth. By his early teens, he was addicted to drugs. "I was addicted to anything I could get my hands on," said Perez. "But even in those years, God saw to it that many people I encountered told me about God and Jesus; but I just ignored them."

He was then shot in the street and almost died. He remembered all those who had talked to him about His message and he called out to God for mercy. God answered his prayer, but, as sometimes happens, after the crisis was over, Perez went back to his old ways down a path of destruction.

Perez ended up with eight felonies, two of which were capital murder charges. It was only then, facing what he thought was going to be a lifetime behind bars, that those words resonated in his mind and in his soul. "I began to focus my attention on the realness and power of God. I began to seek Him to change my life," said Perez.

About a year later, after having faithfully attending church services and being baptized, Perez received a miracle. The state of Texas released him and set him free from prison. Unfortunately, being released with no family, friends or support around him, Perez eventually found his way back into the street life. Sometimes he would try to return to church, but, "Demons would tell me that I was a traitor and that God would never forgive me again after turning my back on Him."

Set Free will be performing before Perez presents his message.

What followed was 14 long years of drugs, alcohol and crime. An angel in the form of a lady entered his life and gave him a tract and told him that Jesus was the only way to the truth and life that he was destined for. He then totally surrendered to Christ and has been free, sharing Christ with everyone he meets. He gave Jesus his life, and He gave it back to him and he has been praising Him ever since.

"Raul is such a unique individual and kind soul. I have never met anyone like him," said Pastor Neal. " I believe that Raul touched so many lives, including kids looking for a word of encouragement who might be straying off their path, helping them right it before they fall." There will also be a Fall Festival on Sunday October 27 before the service, beginning at 3 p.m. Pastor Neal is encouraging all of his fellow pastors in Shafter to share this information with their congregations and youth groups. "Raul is a man who can touch lives, even those young people who might seem hard to reach with conventional services." Perez travels throughout the country spreading his story and being a witness to the power and glory of God.