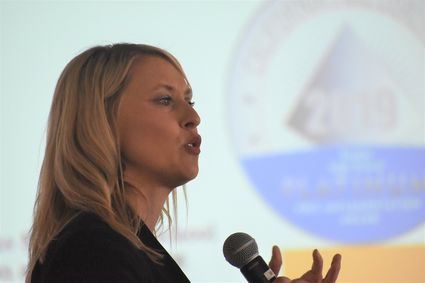 Intervention Counselor Katie Young said that Shafter High has one of the best counseling staffs in the district.

Those residents who are Shafter High alumni know the saying "Once a General, Always a General."

Well, there is another saying going around now and it also gives SHS alumni a great feeling about walking those halls of blue and gold. General PRIDE is a sensation that has swept the campus. Students and staff will tell you that General PRIDE is not a program, but it is an approach for creating a culture on the campus that is positive and has individualized support for students.

No two students are alike, and the staff at Shafter High understand this and give each student a chance to excel both socially and academically. PRIDE is Pride in community and traditions, Respect-Honor yourself and others, Integrity in doing what is right, Determination to be "all in," and Enthusiasm in pursuing your passion.

An important aspect of growing a culture is to establish expectations. General PRIDE fosters a culture where having General PRIDE is expected instead of the exception. By building a positive environment that reinforces that culture, having the students buy into this system has been a success.

According to the dan of students, Valerie Labrentz, the staff at Shafter High is second to none and have the students' progression foremost in their minds. "We are proud to say that we have a wonderful staff that each has a specific part to play in this system, and we all work together to make the students' opportunity to succeed a positive one."

Michelle Ragsdale added, "We are so proud of our General PRIDE team. We are one of only two schools who received a Platinum Award from the California PBIS system of recognition. We are judged on our results throughout the year, and we attained the platinum level this year. Two years ago, we received bronze, last year a silver, and this year, we skipped gold and went straight to platinum."

The system has several different aspects that affect the way a student experiences their time at Shafter High. For those students who show examples of the PRIDE goals, they are rewarded with General Dollars, which they can spend on a variety of items in the PRIDE Store on campus, including t-shirts, bumper stickers, etc. 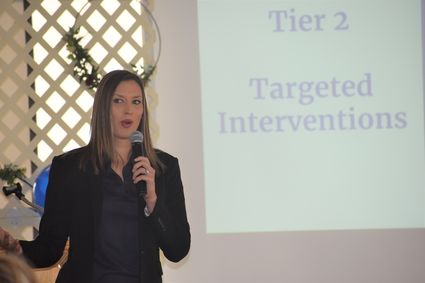 Sabrina Macias, an intervention specialist, talks about the positive results that have been achieved with their outstanding system that is in place.

For those students who may be struggling in their daily walk at Shafter High, the system has a structure in place that will assist that student, based on his or her individual situation and need. Principal Russell Shipley explained: "For those of you who went to school years ago, you know that if you happened to step out of bounds at school, and sent to the principal's office, you probably got either detention, or you got suspended for one to five days. If you got suspended for three days, you came back to school on Monday, and you started over, with the previous week forgotten."

Shipley said that the reason for the behavior was not taken into consideration and was usually not followed up on. Shipley continued, "With this system, we don't just punish the action and wipe the slate. We try to evaluate why the incident happened, and how we can help that student get back on the right path. We work to give our students the attention that they need to help them succeed."

The staff also includes that parents in the process as well, with parent conferences a major part of the system, giving the students the largest support system that can be had to turn their experiences from negative to a positive.