No homeless at camp 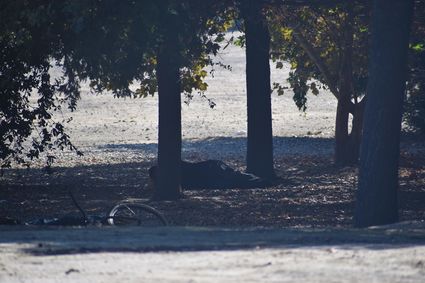 The Shafter Farm Labor Camp will not be hosting any homeless women this year, according to Kern Housing Authority.

The Kern Housing Authority announced recently that they will be utilizing a farm labor camp in the Arvin/Lamont area to house approximately 50 to 75 women this year while the camp is essentially empty during the winter months.

In a report just two months ago, the office was considering using the Shafter Farm Labor Camp on Highway 43 and Merced Avenue midway between Shafter and Wasco, which drew a large amount of opposition. Concerned citizens made phone calls to Supervisor David Couch's office; they also appeared at a City Council meeting, speaking out against the move.

The council sent a letter to the Kern Housing Authority informing the authority that they would have to follow all zoning ordinances and regulations to convert the labor camp into a homeless shelter.

The Housing Authority answered the council's correspondence with a letter that detailed the discussions that had been made, saying they never intended to convert the camp into a homeless shelter. Steve Pelz, of the Kern Housing Authority, had explained in an interview, "This would not be a homeless center situation. The women would have food provided to them and would have transportation provided, deeming it unnecessary for the women to go into the city of Shafter."

He also stated that the women would be assisted in finding housing and employment in the areas in which they came from. The communities of Shafter and Wasco both showed no confidence in the plan and its citizens spoke out against it. Colleen Diltz, a Shafter resident said, "I don't think that it is right for them to really put their problem on us. We have a few people who are homeless in Shafter, but I would not call it a problem. We shouldn't have to have their problem put on us."

This brought up the topic of the homeless in Shafter. Does Shafter have a homelessness problem? It seems to depend on who you talk to.

Captain Diana Burnett of the Shafter Police Department said that they deal with a few people in their duties. "We see a couple of homeless people in the course of our day, and we often try to offer to take them to a shelter or somewhere where they can get some help. But, the majority of them don't want to go. They either don't want to leave Shafter or they don't want to get clean, which a lot of the shelters and their programs require."

The members of the Shafter Press staff have seen firsthand the evidence of at least a few homeless people in Shafter. Before the City of Shafter, who owns the property the office is located on, cut back a grove of trees right beside the parking lot at the office, there was an encampment there. Staff coming in in the morning would see clothes hanging from the branches, cardboard boxes laid down and blankets strewn on the site, creating a makeshift camp.

At the last census of the homeless, there were 15 people counted in the Shafter/Wasco area. Councilmember Cathy Prout said that there might be a few homeless people in town, but the Shafter Police Department does a great job in keeping them moving and not allowing them to stay in one place for too long.

Citizens had asked why Bakersfield and Kern County would make their problem one for Shafter and Wasco. According to Mayor Pro-Tem Cesar Lopez and Mayor Gilbert Alvarado, who spoke briefly about the topic during the last Shafter meeting, the Kern Housing Authority decided to forego the Shafter option for this year, but they fear that the city may be in for a fight when it comes this time next year.