By Stan Wilson
The Shafter Press 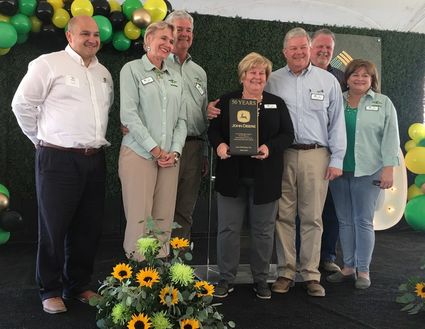 Last Thursday, about 275 guests participated in the celebration of the 50th anniversary of the founding of Kern Machinery, the local John Deere dealer, which is owned by the Don Camp family.

Held at the old Camp Farms headquarters on Merced Avenue, guests were treated to lunch under a huge tent. The private Camp Family Museum, which features about a dozen restored John Deere tractors of various vintages plus many mementoes of the dealership, was open for viewing on the grounds. Among the items on display in the yard was what is believed to be the first tractor sold out of the dealership, a John Deere 4020, to Paul Pierucci.

Edwin Camp said the Camp family can trace their heritage all the way back to Jamestown in l610. They later received a "King's Grant" in the South Carolina foothills.

W.B. Camp was one of eight children growing up on a cotton farm near Gaffney, S.C. After earning an agronomy degree at Clemson College, W.B. Camp was hired by Dr. Cook of the USDA to research the growing of long staple cotton in the West.

W.B. landed in Kern County in l917 and opened the USDA Cotton Research Station in Shafter in l922. He basically started the California cotton industry with the introduction of the Acala cotton variety.

He later worked for Bank of America and then started his own farming operation east of Shafter in 1936.

Don Camp was born into the Camp Family while they lived at the Shafter cotton station. After serving as a fighter pilot in World War II, he graduated from Clemson College in 1947 and married Izetta in 1952. Don began farming with cotton, potatoes, alfalfa and grains. Today the farm grows almonds, carrots, wine grapes, onions, garlic and baby potatoes.

The completion of the California Aqueduct had a great impact, on the Valley bringing water to the west side of the Valley. Don and Izetta saw the need for an equipment dealership on the west side of Kern County and went to the John Deere Western offices in San Francisco to obtain a dealership. They were successful and opened the West Kern Machinery Store at Lerdo Highway and Interstate 5 in l969.

In 1990, North Kern Motor Sports was added in Delano and in 2004 a store was opened in Lancaster. 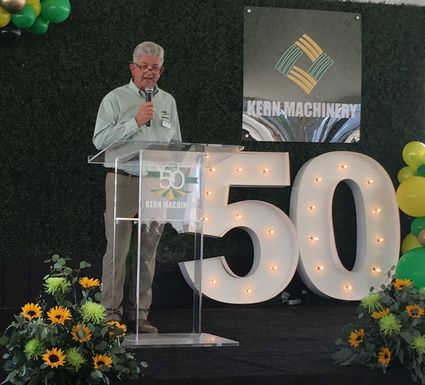 Donald Jr. explained how the dealership has grown with precision ag, the exploding use of technology and the change in the region to high-value crops. He quoted his Dad, Don: "It is important to treat people the way you want to be treated. Be honest and work through any problem."

Clayton acknowledged the customers and employees that have contributed to the business, but said, "It is a blessing from God that made the business successful." Clayton joined in the management of Kern Machinery in 1985. He said that "John Deere was a great partner and always on the cutting edge looking to the future." He also acknowledged the other manufacturers that Kern Machinery represents: Rears, Wilcox, Exact, Weis-McNear and Progressive Sprayers,

Adrian Saenz, divisional sales manager of the John Deere Co., presented a special plaque to the Camp family in recognition of 50 years. He said of the Camp family, "Their word means everything thing and that's the way they operate the business."