Church serves city inside and out 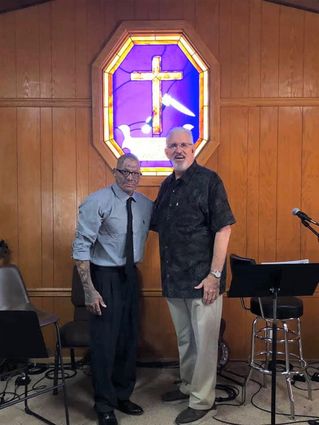 The First Southern Baptist Church in Shafter had a big weekend recently when they hosted a nationally known evangelist and also held a Harvest Fair for the community.

Evangelist Raul Perez, who came to Shafter for the first time last year, made a return visit and held an evangelistic crusade for three days, Friday, Saturday and Sunday. Perez has a unique story and relates to many because of his background in which he has faced so many challenges on his way to redemption.

"Raul is so successful in his ministry because he doesn't just stand up in the pulpit and preach about what to do and not to do," Pastor Jim Neal said. "He tells his story, which contains so many trials and shows how God can use anyone and help them bless so many others."

The crusade was opened on Friday night with "Set Free," a band that played at last year's event. They are a local group that contains a family of singers who sing Christian Alternative, as well as some unique covers of popular songs that the group has changed to give them a positive message.

When it was time for Perez to take to the platform, some eyebrows raised as he took his place up front. When first meeting Perez, some are surprised at the tattoos on his face, arms and body. But, the message that he relates helps explain his story, what he went through and how he got to a place in his life that allows him to be a tool for the Lord.

"I have been in prison, facing a life sentence, having no hope in sight. But, just when you are at the bottom, God can pick you up give you a new life."

Perez was in a gang, hooked on drugs, committing crimes when he was sentenced to prison. Perez was no stranger to the Lord, having been given the Word numerous times throughout these trying times. But, according to Perez, it just wasn't the time for him to receive it. "Once I received God's grace and truly accepted Him, my life changed so much. I cant stop talking about His power and glory now, giving anyone who will listen His message."

Perez also likes to go to schools to tell his story, relating easily with the kids who may not be going in the right direction, letting them know that there is a way out.

Each night Perez told his story and what is special about the message is that it is not a message full of do's and don'ts, cut and dry words that can be heard on about any religious network. The message is one that is of a humble man, who could be anyone, finding redemption in a world that is quick to condemn anyone who does not look a certain way, or behave a certain way. This message is Perez's, and a unique one of victory. 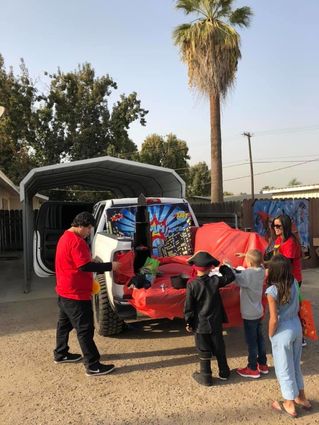 One of the vehicles at the Trunk or Treat had a superhero theme.

The church also served the community on Sunday afternoon with a Harvest Fair full of fun and activities for the entire family. There were bounce houses, food, drinks, games and other fun. There was also a Trunk or Treat event that saw several vehicles decorated in different themes, each one with a bunch of candy to hand out to the kids. There were sports-themed cars, as well as superhero vehicles on display. "I thought the superhero car was so cool," said Juan Madrigal, who was there with his mom, dad and sister. "The bounce house was really fun, too."

Pastor Neal was glad that the events drew a good amount of the community for them, even those who weren't going to the service, still came and enjoyed the Harvest Fair. "We wanted to reach as many of the community that we can, giving them a great time of fun and fellowship."