Down to the rivalry game 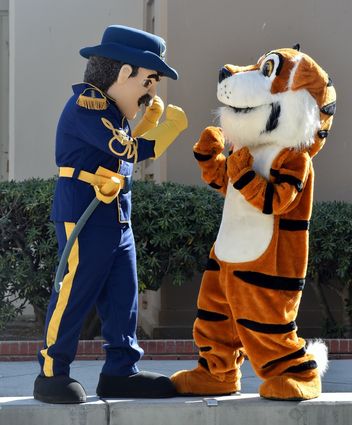 Wasco Week is about to begin!

Shafter High will be the host this year for the annual battle between the Generals and Tigers, who will square off on Friday, Nov. 1. This will be the 93rd meeting of the two schools, in one of the most storied and fiercest rivalries in the valley.

Those who wear blue and gold will take the victory from last year's game into next week as they have a renewed energy and confidence in what had been a one-sided game for several seasons up until last year.

Wasco had won 10 straight in the rivalry until the successful season that the Generals had in 2018, including a long-awaited victory on the Tigers' home field.

The teams have different looks this year, with several of the General players moving on after graduation, but the rivalry is bigger than ever. Shafter is still in the hunt for the league championship, but Wasco could put the nail in the coffin by beating the Generals.

The week is filled with dress-up days, fun activities at lunch time, building up to Friday, which is one of the most unique spectacles in the state. There is a Community Rally for the everyone at the old Shafter High gym on Wednesday night at 7 p.m. There will be a rally, and the traditional bonfire in the quad, burning the Tiger.

The players will do battle on the field on Friday, Nov. 1 in Shafter.

Since Shafter is the home team this year, they will host the Wasco football players, Associated Student Body and cheerleaders on Friday morning at a breakfast. It is then off to the Shafter High gym for the Shafter rivalry rally. This event is full of spirit, chants, performances of both team's cheerleaders, and introductions of the players and coaches. The rally concludes with a video that is produced by the school's students and advisors.

After the Shafter rally, it is on to Wasco High for the Tiger version of the Exchange Rally. Students and faculty from both schools consider the Shafter/Wasco game the highlight of the season. Even if a team is having a mediocre season, a win in this game can make up for a lot. Brian Feaster, athletic director and activities director for Shafter High, said, "This is such a great tradition and it is really thanks to the hard work of each school's ASB crews, the players and the staff that make it such a special one."

The passion for this rivalry can be summed up pretty well by reading the back of long-time Shafter teacher and coach Gary Kern shirt that he sports this time of year. It reads, "I Hate Orange." Enough said.