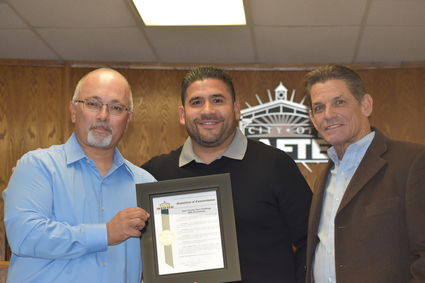 The North Shafter area will see improvements in its infrastructure under a project approved by the City Council Tuesday night.

The council awarded a contract to Kern Asphalt for work on the shoulders of Highway 43 from Mayer Lane to Tulare Avenue.

In the decision, the council also approved a project to put monument boxes along the roadway. These monuments establish the centerlines of roads within these communities. A field investigation by city crews traced and located seven of the 24 mocuments.

Sandoval Construction submitted the lowest bid to install City standard monument box assemblies. The assemblies would include the seven confirmed monuments, as well as for the remaining 17 monuments that will need to be set.

Regarding the shoulder work that is to be done, the shoulders originally were not adequately constructed to withstand street drainage and periodic pedestrian and vehicle traffic. This issue was reported to Caltrans because the roadway is a State highway, but their crews are not prepared to address it at this time. Therefore, proposals were obtained by Public Works to clear and grade the shoulder plus place and compact decomposed granite as a finished surface. Less than 200 cubic yards of soil will be disturbed through this project.

A two-inch layer of the decomposed granite will be spread over the work area after the soil preparation. The finished stabilized shoulder will be eight feet in width and match the elevation of the existing asphalt concrete pavement and will be graded to drain away from the pavement. The proposed cost of the projects is $60,000. There is adequate city's Transportation Development Act Article 8 funding that can be allocated to cover the cost, according to city officials.

The Council approved the project by a 5-0 vote.

Another item on the agenda was the appointment of the city's representative on the Kern Mosquito Vector Control Board. This position is a two-year commitment, with the board's primary objective of the progressive elimination of mosquito breeding places. This is done by control measures, performing services of temporary relief control, establishing projects of source reduction and using abatement methods when necessary.

There were two candidates that were interested in the position. Tim Unruh, district manager of the Kern County Cemetery District, has served on the board the past two years. Unruh filed a letter stating an interest in continuing to serve on the board. There was one other applicant, Albert Barrera, but Barrera did not file before the application deadline.

Mayor Gilbert Alvarado stated that he didn't realize that the council members would be eligible to serve on the board if interested and was suggesting to extend the deadline for applicants.

Acting City Manager Jim Zervis said that they could do that if they wanted to. Councilmember Cathy Prout questioned why the deadline was going to extended, Alvarado said that he didn't realize that the Council was able to be involved in the board. City Attorney Martin Rodriguez confirmed to the council that they are eligible to serve on the board with no fear of there being any legal issues involved.

"Why would we extend the deadline?" Councilmember Chad Givens asked, " Is there someone on the council that is interested in being involved in it? I know that I am not interested in serving on it."

Prout then asked Alvarado if he was interested in the position. Alvarado said that he didn't see an issue with the deadline being extended a couple of weeks and made a motion to extend it. But, there was no second to the motion.

Then Givens made a motion to keep the original deadline and reappoint Unruh to the board. There was a second and a vote was taken, which was 5-0 in favor of reappointing Unruh to the position.

In a presentation, Mayor Alvarado, on behalf of the entire City Council, awarded akKey to the city to Teen Challenge International. This organization has served over 20,000 men and women in Kern County who are drug- or alcohol-dependent, helping them on their way to recovery. It is a residential, faith-based program that has helped save thousands of lives over the past 50 years.

"Teen Challenge has not only served so many men and women who are addicted to drugs or alcohol, but they also have served the city of Shafter in so many ways," said Alvarado. "They have helped out during Cinco de Mayo, the Christmas Parade, banquets, and many other events in the city. I believe the success you have enjoyed and keep having is the fact that you are a faith-based organization and we thank you for being a part of Shafter."