WWII papers in display at Minter 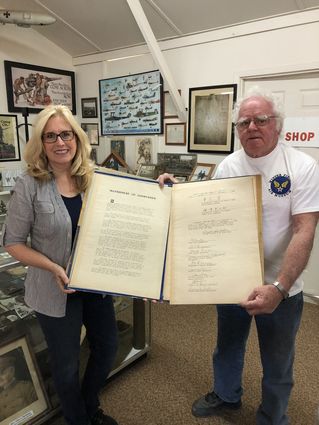 Victor Wessel's daughter, Cheri Mudryk, with Ronald Pierce of the Minter Field Air Museum, holding one of 12 copies of the surrender documents signed signifying the end of World War II.

Minter Field Air Museum will have a new display in the near future, thanks to the daughter of a World War II veteran who wrote one of twelve documents that were used in the surrender of Japan, ending World War II.

Cheri Mudryk, a Bakersfield resident, brought a copy of the surrender documents that her father had a hand in writing.

Victor Wessel Jr. was a long-time employee of the old Coffee's Men's Store in Bakersfield when he decided to join the Army. He was assigned to Company E, 112th Infantry. Wessel was a sergeant at the time when he drew a map to show his men that he was training what type of terrain to expect.

One day, the camp commander came by and listened to Wessel and took a look at his drawings. The commander then asked Wessel if he could draw a map of the camp so they could make improvements. As a result of his efforts, Wessel was awarded a letter of commendation and was sent to Washington, D.C., as a draftsman.

Mudryk said that Wessel was working in the Pentagon, drawing maps that were used during briefings and meetings for the chiefs of staff.

Twelve of the country's 72 draftsmen were selected to work on the Instruments of Surrender, which were to be signed by the Japanese, Americans, Republic of China, United Kingdom, USSR, Australia, Canada, France, Netherlands and New Zealand.

Wessel told Mudryk "The State Department approved what was to go into it, then it was sent to us to do the first draft."

The document was returned to the State Department for approval, then went back to the 12 draftsmen who each made an identical copy using a Leroy lettering pen. 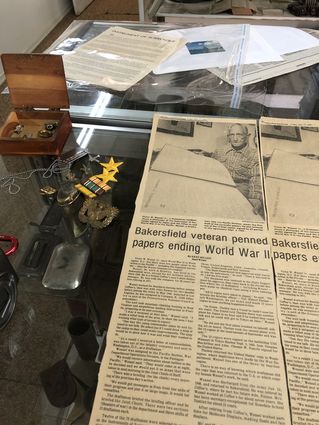 Wessel was the subject of a Bakersfield Californian article.

The copies were signed on the battleship USS Missouri in Tokyo Harbor on Sept. 2, 1945. General Douglas MacArthur and Adm. Chester W. Nimitz signed for the United States. The U.S. copy was sent back to Washington, where duplicates were made by the War Department. Wessel was given one of the three-by-four feet copies.

Cheri said, "I didn't know anything about this until one day I was going through things and my dad mentioned that he had a copy of the surrender documents that were signed to end the war. I told him that this was probably something that he should have mentioned a long time ago."

Mudryk is getting a copy made of the documents to donate to the museum. "I think that a lot of people will be interested in seeing these documents that ended a World War," Mudryk said.

Pierce said that the documents will be on display very soon, so you can come out for a glimpse of an important part of our American history.