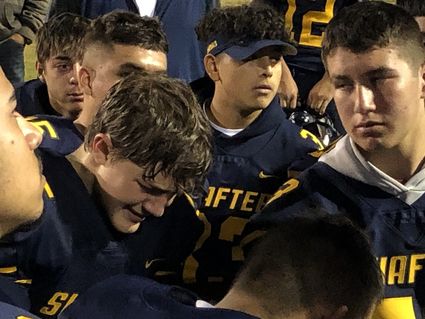 Jensen Boyt and teammates have trouble keeping it together at a post-game meeting.

A football game is a contest made up of four quarters. Unfortunately, on Friday night, the Shafter Generals only showed up for two.

Up against the Arvin Bears in the first round of the Division V playoffs, Shafter saw the Bears dominate them in every phase of the game in the first half. After spotting the Generals a two-point safety on their first series, the Bears scored 28 unanswered points.

The Generals troubles started on offense, with the hosts unable to sustain a drive because of missed blocking assignments and numerous dropped passes, giving the Bears the ball in good field position.

As in the first meeting between the teams three weeks ago, Arvin was successful in the first half on offense, mixing in some gimmick plays with some effective running by their speedy quarterback. Down 14-3, it seemed the Generals had successfully pinned Arvin deep in their own territory, making them start their drive inside their own 10-yard line.

But, in a play that exemplified the Generals' first half, a Bear running back ran through the Generals' defense, with at least six defenders getting their hands on him, none of them able to wrap him up for a tackle. Instead, the Bear back ping-ponged his way 92 yards for a touchdown, making the score 28-2,

Shafter did manage to score once on a Jackson Sanchez 11-yard run to cut the lead to 28-9 at the half.

The Generals seemed to be righting the ship at the beginning of the second half when Leo Fernandez took the second half kickoff 95 yards for a touchdown, getting the Generals back in the game at 28-16, With the crowd behind them, the Generals had the momentum and held the Bears on their next possession, But, the Generals offense gave the ball back with one of their three turnovers of the night, killing the drive.

Arvin made them pay with a quick strike touchdown, making it a three-score game once again. Shafter kept up the pressure at the beginning of the fourth quarter and cut into the lead once again with a 35-yard touchdown pass from Sanchez to Felix Chacon, making the score 35-23. Shafter's defense gave the Generals the ball back with over six minutes to play, and the Generals responded with a series of short passes that got them down inside the 29-yard line. Sanchez found the endzone again to cut the lead to 35-30.

Arvin was unable to move the ball on the next series and had to punt. The Generals started the drive deep in their own end. After a penalty backed them up even further, Shafter saw its hopes end when Sanchez threw a quick pass to the left and it was picked off by a Bear defender who returned 20 yards for a touchdown, make the final score 41-30. 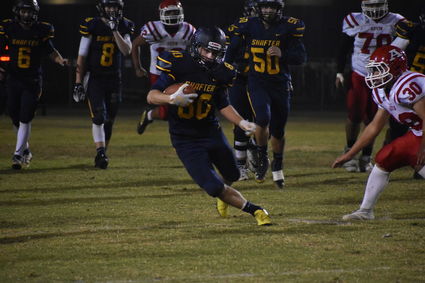 He went on to say that he was very proud of those guys, the way they battled back after starting the season so slow, almost mirroring the game that they just played. He admired them for the way that they didn't give up and gave it all and kept getting better.

Arvin will now go on to play the winner of the game between Strathmore and Taft in the quarterfinals.