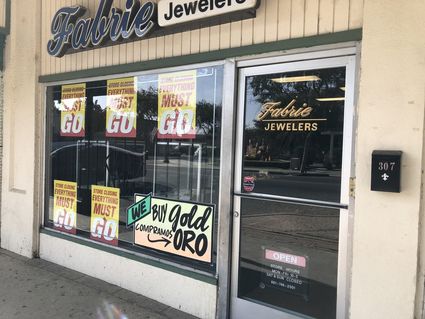 Fabrie Jewelers was burglarized over the weekend, with an estimated loss of $50,000.

Fabrie Jewelry Store was the victim of a burglary over the weekend, with the culprit or culprits getting away with an estimated $50,000 worth of merchandise.

Richie Fabrie, owner of the store, said that he didn't discover that he had been burglarized until Monday morning when he opened the store. "The alarm system was still armed. It didn't go off, so whoever did this had to have disabled it."

Once entering the store, Fabrie noticed that the cases in the back of the store were open and the contents were gone. "I would guess that they got away with around $50,000 worth of merchandise," Fabrie said.

Shafter Police Department arrived and took fingerprints and looked for any evidence in the front and the back of the store. The cases that had contained estate jewelry and higher-end jewelry were the cases that were emptied.

Fabrie has been open for over 75 years and had been starting a "Going Out of Business Sale" in the near future, with Richie deciding to retire. This incident makes the future uncertain. "The majority of the merchandise that we were going to sell for the big sale is gone. I don't know what we have left to sell for it. I will have to think about our plans moving forward."

Shafter Police Chief Kevin Zimmermann said that this was a very professional job and one that they have not seen in this area. "But, we have an evidence technician on our team, Melani Pailing, who has been trained at the finest institutes for just this kind of work, gathering latent evidence in scenes such as these."

Zimmermann also said that all it takes is one piece of this type of evidence to help them apprehend the suspects. "The investigation is still in its infancy, but we are working hard on it and are continuing investigating while we are waiting for the latent tests to come back, such as looking for any witnesses, etc."

There was no security footage of the perpetrators available, so they will have to rely on any evidence left at the scene, he said.

The investigation is ongoing.