Minter's show of force at parade 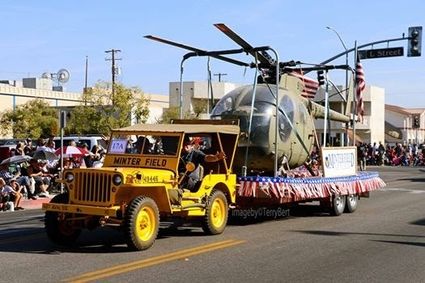 MFAM board chairman and WWII veteran Everett Williams drove the museum's.Follow Me Jeep in the Bakersfield Veterans Parade.

The Minter Field Air Museum had the honor to participate in 100th year of a tradition that saw a huge crowd gathered for the Bakersfield Veterans Day Parade. The event, which took place in downtown Bakersfield, drew a lot of fans from around the county, as well as revelers paying their respects to the men and women who have served, or are still serving, the country.

Minter Field was represented by the yellow Follow Me Jeep, driven by the MFAM chairman of the board, WWII veteran Everett Williams. He was a B29 side gunner and engineer stationed in Guam. He flew 27 missions over Tokyo.

The museum also had a 1940 staff car driven by David Anderson. The passenger in the vehicle was Ronald Holdsworth, WWII veteran of the Royal Air Force. Holdsworth was a tailgunner on a Handley Page Halifax bomber. He flew over 32 missions in France.

Another jeep was on display, with Arnold Martinez driving the antique vehicle with passenger WWII veteran Elmer "Frenchie" Defreese, USMC. He joined the Marines at age 16 and served in the Pacific Theater. 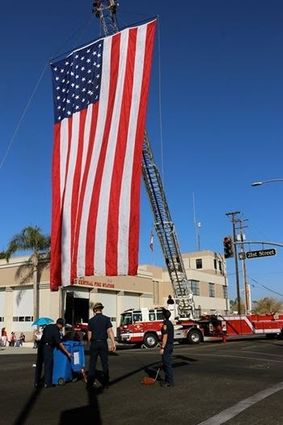 An American flag flew across the veterans parade.

There was also a special Minter Field Air Museum sign on wheels that was made by a Boy Scout last year as his Eagle Scout project.

The Bakersfield Veterans Day Parade has been tradition for decades, with a number of antique vehicles on display, as well as current equipment and vehicles used in the different branches of the military today.

"We are honored to be a part of this parade and its rich tradition. We enjoy bringing out our popular exhibits to entertain the kids and the adults," museum leader Ron Pierce said.

This is just a taste of the popularity that the museum enjoys as it brings history to life for many people in Shafter and the rest of the county.

The museum also will be represented at the Kern County Raceway Park and several other events coming up.