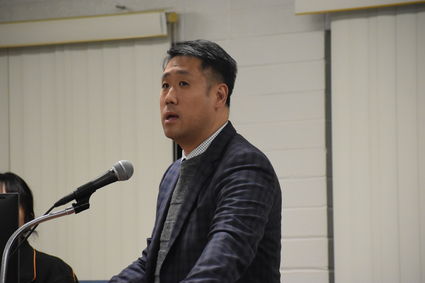 Ken Pun, of The Pun Group, Inc., gives a presentation of the company's audit of the city's financial reports.

Unexpected sales tax revenue from online business, higher oil prices and new businesses have put the city in an improved financial position, according to reviews presented to the City Council this week.

The Shafter City Council listened to a presentation of the Financial Report and Audit for the fiscal year ending June 30 at their regular meeting on Tuesday.

Presented by acting City Manager Jim Zervis, the report stated that the city is "financially sound" and had a net increase of total assets of over $12 million. Ken Pun, of The Pun Group, Inc., who did an audit on the financial reports prepared by Zervis and his staff.

The city ended the fiscal year with over $168 million in its asset portfolio, up from $156 million in 2018. The majority of this increase was sales tax revenue, about $2 million over what was projected in the budget due to an improvement in sales tax revenue from a large online retailer within the city, recovering crude oil prices and the development of new businesses within the city.

The majority of the $12 million change in the city's financial position is the result of an increase in governmental revenues, which are items such as sales tax, property tax, charges for service, such as fees associated with running the Modified Community Correctional Facility. The revenue accounted for by the MCCF was one of the few items that decreased from 2018, because of the total average inmate population for the year.

There was a $700,000 deficit in the Rail Spur Services fund for the year. This was due to higher salaries and wages. This year was the first in four years that showed an increase in containers moved at the facility. In 2015, the city moved over 1,300 containers. With the bottoming out of oil prices, the count decreased to a low of 82 in 2017. In 2018, the number moved back up to 221, and ended 2019 at 216 containers.

The report also noted that the city's pension fund is fully funded at over 100 percent. The city has prepaid monies to the fund, eliminating the pension liability.

In a related presentation, Ken Pun, of the accounting firm The Pun Group, presented a Single Audit Report required for any city that spends over $750,000 in federal money. The majority of the money, according to Zervis, was for road projects in the city.

"We were very impressed with the reporting, accuracy and transparency of the City of Shafter's financial reports that were prepared," Pun said.

The accountants had no issues or disagreements with the reports that were submitted by the city. "Shafter is in a very strong position financially and has a solid foundation that is fairly and accurately recorded," Pun said.

In other city action, the council voted to move forward on using grant allocations for the installation of a $90,000 outdoor fitness court at Mannel Park.

The fitness court may replace the current beach volleyball court. This court would consist of several exercise stations, and would include an app offered by National Fitness that can be used by participating residents for an overall fitness program There would be seven different stations that provide a circuit training system providing full body workouts.

The council discussed adding another outdoor fitness court at Veterans Park. This court would have several stations, including having the stations be wheelchair accessable.

The last item on the agenda was the resurfacing of the competition pool at the Shafter Aquatic Center. The city has only received one bid for the project, by Pool Tek. The company said that they lack the crew size and equipment to complete the project in a timely manner, but can tap resources through partnerships with other contractors in the Los Angeles area.

There is a strict timeline for the project to be completed by January, when the pool would be needed by the Shafter High swim team.

The council authorized a maximum of $30,000 for the project.