Lady Generals have success in tennis 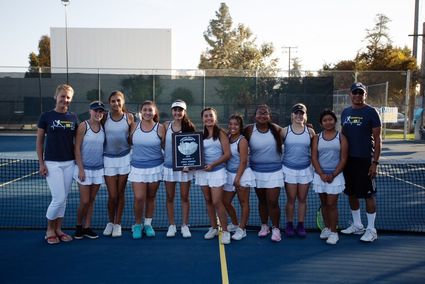 The Lady Generals had the most successful season in decades. With everyone returning, 2020 should be a special season.

It has been over four years since Shafter High has won a Valley Championship in any sport, the last being the boys cross country team in 2015. The Shafter High Lady Generals tennis team came within one point from capturing that elusive title.

Shafter heartbreakingly lost to Tulare Mission Oak in the Division V title match with a score of 4-5.

The lone winner in the singles portion of the match was No. 1 player Nayeli Puente, who defeated Mission Oak's Madison Bowen 6-4, 6-4. It was a tight match that saw the lead change hands seven times. Puente used a steady ground game to force Bowen into errors at crucial points. She also used her trips to the net effectively, putting away some quick points whenever she had the opportunity.

No. 4 singles player Arly Galindo from Shafter also had a very close match. She opened with a very steady ground game, outlasting her opponent Amy Swall in most of the points and winning the first set. Swall came back in the second set, forcing Galindo into some errors. After a lot of rallies lasting more than a minute each, Swall pulled out the second set in a tiebreaker, forcing a third set. Galindo pushed Swall to the limit before succumbing 8-10 in the third set tiebreaker.

The other singles matches were equally competitive, but the Lady Generals came up just short, leaving them with an insurmountable deficit. The Lady Generals won the doubles matches, making the final score 5-4. 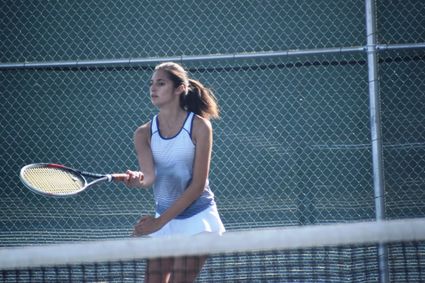 Nayeli Puente was the lone winner in singles.

At one point in the singles portion, Shafter had the lead in four of the remaining matches. But, the Mission Oak players were ultimately able to pull ahead. The Hawks' experience made the difference in the majority of matches. Early on in the match, Shafter Coach Lana Sharp said, "Mission Oak has a team full of seniors who have played together for four years. We have zero seniors, and our players have played together for three years. This might end up hurting us."

Coach Sharp, who has coached the Lady Generals for eight years, does so as a volunteer. She has imbedded in the team a solid foundation of the fundamentals, teaching the girls how to play the game correctly and enabling them to compete at a high level.

"The girls competed really well. The rallies were anywhere from 20 to 30 shots. It was a point here and a point there that decided the outcome of certain matches," said Sharp. "The way our girls competed was very respectable. I am really proud of them."

With the entire starting lineup returning for the Lady Generals, the team is expected to be a top contender for the Valley title.