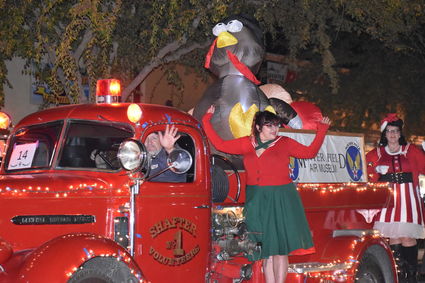 Donald and Izetta Camp were remembered by family, friends and community members as a standing-room only crowd attended the farewell and celebration of their lives.

The two local pioneers – who died within days of each other after 67 years of marriage -- were laid to rest on Monday following a joint service at the First Presbyterian Church in Bakersfield.

Donald Camp, Jr. spoke about how he always saw the two as a team, so it was fitting that they would go to eternity together as well.

Don and Izetta were fondly remembered as a couple that "always thought of others, and never turned away from a need," said Pastor Jeff Chandler.

Chandler told the audience of the time when his daughter was doing a History Day project that involved agriculture, which he knew nothing about. He was told to ask that Don Camp, he would probably know what it is. "Well, he spent an hour with my daughter, patiently explaining to her the subject, and she ended up with an A."

Donald and Izetta were married in 1952, after courting for a few years. Their first date was arranged when Izetta's father, who was a Clemson classmate of Don's father, suggested that she ask Don to a local dance while he was in South Carolina on business. That one date was the start of a love affair that lasted the rest of their lives.

They raised five children, and the recurring theme in the life of every child and grandchild who spoke at the service was the love that they had for each other. God and their family.

They leave a legacy that lives on in their children, grandchildren and great-grandchildren. Their example greatly touched others outside of their family also.

Lucas Whooten said that he frequently would go to their John Deere dealership and the way Don, when he was there, and his sons would treat their customers was special. "It didn't matter if you were buying a couple of parts, or if you were buying three tractors, you were treated the same, and always with respect."

Former Shafter City Manager Scott Hurlbert said that he knew Don and Izetta, and they were a special couple. "I dealt with his son Edwin more, but I thought the entire family was special."

Camp was a farmer, gaining numerous accolades through the years, as well as an owner, with his family, of several John Deere dealerships, including Kern Machinery. He also was an avid fisherman and hunter, and loved spending time with his family.

Izetta was remembered as a southern belle that was transplanted to California, but never lost that southern charm. 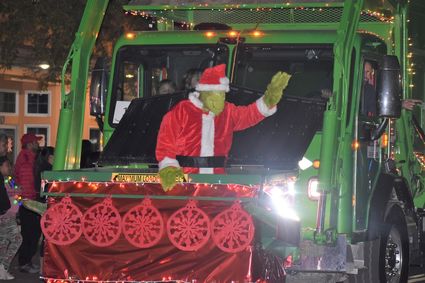 The Grinch made a surprise appearance in the parade, courtesy of American Refuse.

"She was a special lady. She was just as comfortable talking to a dignitary as she was a neighbor, and also treated both of them the same, with respect," said son Clayton. Tales also abounded about her skill when it came to navigating the way from their ranch off of Merced Avenue, to the schools in Shafter, 12 miles away. "She was always on time, every time. I think she knew how to get us there in the quickest way possible, knowing the way to go the fastest. "Yes, my mother was an accomplished race car driver," joked Edwin.

Everyone who spoke on Monday, and those who have commented in the time since their passing, has mentioned that the couple were always quick to help those in need, but never expected honors. They and shied away from the limelight, preferring to let their actions and deeds speak for them.