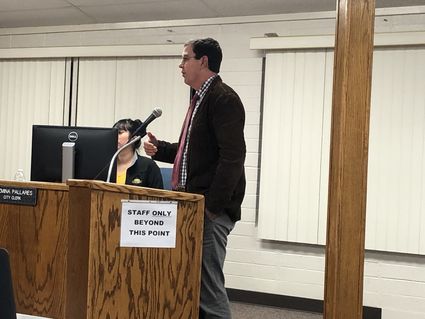 David Franz gives a presentation on the changes being proposed in the Advance Shafter Program.

The Shafter City Council voted to extend the services of The Pun Group, which performed this year's audit on the City of Shafter, for one more year. Ken Pun and his staff completed the audit of the city and presented its findings to the council during the Nov. 19 meeting. Their findings stated that the City of Shafter is financially sound and did not find any inconsistencies in its records or budgets.

Acting City Manager Jim Zervis said that he recommended retaining the services of the Pun Group for one another year to keep the continuity in the city's operations during a time of transition. Zervis said that starting in January 2020, the city is implementing new accounting and billing programs, and training is going on in preparation of the change. "I believe that to try to find a new auditing firm and bring them up to speed on the operations and specifics of the city may be detrimental to the city," he said.

The city charter requires the auditing firm be changed every three years. The Pun Group has served the city the past three years in this capacity. The charter does state that the agreement can be extended, but it requires the adoption of a resolution to make the change.

In other agenda items, David Franz, director of the Education Partnership, gave a presentation on proposed changes to the Advance Shafter Program. This program provides benefits to Shafter High's Advanced Placement students. In the current guidelines of the program, students qualify for a $200 cash incentive for each test that they get a qualifying score on. In the current state, teachers also are qualified to receive cash incentives for their students who perform well.

The proposed changes in the program include the elimination of the cash incentives for the teachers and also puts a cap on the money that AP students can earn to $200. With the savings that the city would see with the change in the program, according to Franz, the city would be able to offer all students a Bakersfield College scholarship. This scholarship would be for any student, no matter what their course of study. The requirements would be that the student would have to be a Shafter High graduate, be taking at least one BC course in Shafter and have at least a 2.5 GPA. This gives all students an opportunity to benefit from this program.

The council's final action was the approval of a policy of discontinuation of water service. Beginning in February 2020, the city must comply with State Bill 998, which puts restrictions on how and when a city can shut off a resident's water service.

The city's policy is intended to meet these requirements, which includes payment options such as a plan for deferred and alternative payment schedules. It also requires a formal appeal process for disputing bills. Residential water service cannot be interrupted until the customer is notified at least seven days before the scheduled interruption date and the account is at least 60 days delinquent.

In the proposed policy, customers must demonstrate that they are unable to pay and that they are willing to enter into an alternative payment arrangement.

According to Zervis, the fiscal impact this policy will have on the city is that there will likely be an increase of delinquent and uncollectable accounts because is will place restrictions on the city's ability to shut off water service for nonpayment. Zervis said that the costs cannot be estimated at this time, but will likely be absorbed by other customers of the city's water fund. Zervis said that the city will be tracking the costs of delinquent utility accounts starting in January 2020, and that they will be able to report on these costs in the future.