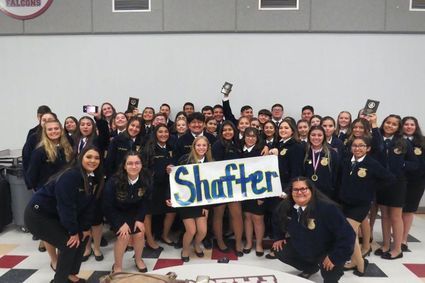 The Shafter FFA shined at the recent competition at Independence High.

On Nov. 20, 48 Shafter FFA students traveled to Independence High School to compete in the FFA Opening and Closing Speech Contest. One of the largest speech contests in the South Valley Section, over 400 members on teams from 10 schools were present to compete.

FFA members participate by reciting the FFA opening and closing ceremonies. The purpose of the speech teams is not only to teach students valuable public speaking skills, but also to encourage them to increase their involvement and take advantage of all the opportunities that the FFA organization has to offer.

For freshmen students, this was the first competition of the year. Ellie Flud, a Shafter freshman, said, "The contest helped me be less shy, and I am excited for future contests with FFA."

Shafter FFA senior Isis Brownlow commented, "The opening and closing contest was the first time I was able to break out of my shell as a freshman. Before the contest I rarely talked and wouldn't have dreamed of speaking publicly. After competing as a freshman, I was excited about the opportunities available to me through FFA and I have competed in almost all the public speaking contests that are offered. This contest specifically, changed my entire high school career."

This was also the first year that South Valley FFA offered the opening and closing speech contest in Spanish. Nathael Samano, Yarely Urias, Joneli Lule, Nancy Maldonado, Anahi Gonzalez and Esmeralda Castro placed second in the Spanish division as a team. Yarely Urias was the Outstanding Vice President and Anahi Gonzalez was the Outstanding Reporter in the Spanish division.

The event highlights the fact that Future Farmers of America is much more than showing animals at the fair. The organization conducts speech contests and crop and livestock judging, as well as horticulture and agriculture mechanics. FFA empowers students with knowledge in different agricultural fields while allowing them to gain valuable hands-on experience that will help them in their future projects and careers.