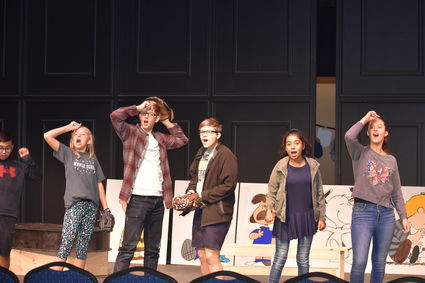 The cast belts out "Baseball," one of the featured numbers in the play.

For over two decades, the children of Shafter have been the beneficiaries of the Shafter Children's Summer Theater, led by creator Cris Starrh and a large staff of volunteers.

The community of Shafter has also been a beneficiary, having been treated to a variety of entertaining performances over the years.

For quite a while now, Starrh has been toying with the idea of forming a theater group for the young adults of Shafter and the surrounding areas. With the return of her daughter, Dana Starrh, that idea has become a reality.

The Young Adult Theater of Shafter will host its debut performances of the classic "You're a Good Man, Charlie Brown" on Dec. 20 and 21.

The play, with a cast of six performers, is the good material for the group's first production, according to the director. "Having a smaller cast for the first production seemed like a good idea. It will make the first year a little easier to put on," Starrh said.

Starrh said Dana has been the leading force on the project and the catalyst that brought the troupe into existence.

"Because Shafter has such a big pool of talent, it makes sense to give kids a venue and platform to get involved in after they age out of the children's theater," commented Starrh.

She said it is also an immense help to the high school program as it gives the kids valuable experience before they enter high school. "By the time they start high school, the students have already been through the jitters of being on stage and have that confidence of being out in front of an audience."

This sentiment has also been expressed by a couple of the cast members. Megan Bloemhof, who was Annie in the Children's Summer Theater, said the experience on stage has helped her in every phase of her life. "Before I started in theater, I was very shy, without much confidence. Now, I volunteer in class and have self-confidence that I didn't have before," said Bloemhof.

The same goes for Bethany Neufeld, who said she started performing in the Children's Summer Theater in the first grade. "I started out early and am now in the Shafter High Drama Club. The experience has helped me so much in my drama classes."

Neufeld also said she loves the thrill that she gets from performing. "I love the excitement of being in the spotlight."

In addition to Neufeld as Charlie Brown, the cast includes Bloemhof as Sally, Lauren Givens as that loveable, cranky Lucy, David Bloemhof as Schroeder, Paulina Evangelista as the beloved beagle and best friend Snoopy, and Joel Espinoza as the blanket-carrying poet and philosopher Linus.

The play is directed by Cris Starrh, Dana Starrh, Katelyn Akman and Cody Garcia. "We are fortunate to have a professional taking the time to help direct our production," said Starrh, referring to Garcia, who has performed in numerous productions on some of the biggest local stages. The stage crew consists of Laura Neufeld, Charlotte Franz, Jalie Grundt, Jayna Pierucci, Brent Starrh and Media Star. In the orchestra pit will be Chad Givens and Caleb Priuett, along with Cris and Dana Starrh. 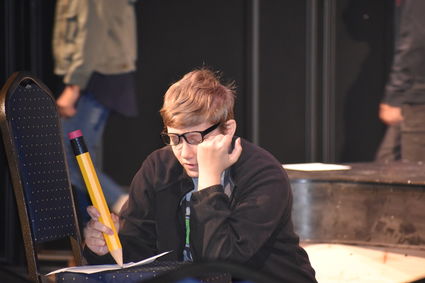 Charlie Brown is being played by Bethany Neufeld.

The play is a musical comedy based on the beloved Peanuts characters created by cartoonist Charles Schultz. It follows the journey of Charlie Brown and his friends as he tries to discover the reason he is said to be a "good man." The adventure takes him from trying to master flying his kite to the baseball field, where he attempts to win the championship with his team, and through the trials and tribulations of his friends as well.

The performances will be Friday, Dec. 20, and Saturday, Dec. 21, at Shafter's Ford Theater, 1101 E. Lerdo Highway. Shows will begin at 7 p.m. on Friday and Saturday evening, with a matinee on Saturday at 2 p.m.

Tickets can be purchased at the door, in advance at the Ford Theater's box office or over the phone by calling Melissa Dewitt at 661-903-0442. Tickets are $10 for adults and $5 for children under 12.