"Must Be Santa," performed by Regina Voelkers' class.

The Golden Oak Tigers had a packed cafeteria on Tuesday morning as they held their annual Christmas program. Santa arrived and played emcee for the event as all of the classes had their turn on the stage.

Parents, friends and family filled the space up as the kids performed a variety of holiday songs, including Mrs. Lopez's class, who kicked things off with "Santa Claus is Coming to Town." Santa told the kids after the song that he really could see if they were naughty or nice, and that he thought all of the Tigers had been nice this year. 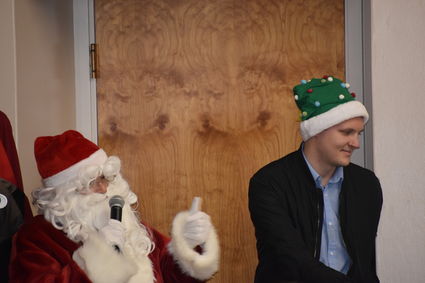 Santa was the emcee for the event, along with his elf helper Bernard.

Of course, the tried and true number "Jingle Bell Rock" was on the song list, with Mrs. Prater's class having the honors. There was also an old time swing song as Mrs. Starr's class performed "The Blitzen Boogie." Mrs. Santer's class sang "Must Be Santa," with props and choreography to go with it.

Mrs. Starr's, Mrs. Prater's and Mrs. Voelkers' classes then joined together to perform "Silent Night," with singing and acting it out with sign language.

All of the classes joined together at the end of the performance for a rowdy rendition of "Feliz Navidad," with a many parents joining in. "This is always a crowd pleaser," commented Principal Anamarie Mendez, while the kids were preparing for the final number.

After the program, the parents had an opportunity to have their child's picture be taken with Santa.