Rudolph gets a break as Santa flies in 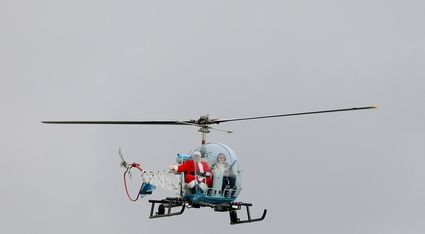 Santa and his pilot circled the landing area before touching down.

To the delight of over 150 people awaiting his arrival, Minter Field played host to the jolly old fellow from the North Pole on Saturday.

The Minter Field Air Museum sponsored their annual Santa Fly-In, giving everyone a chance to meet St. Nick. Museum Director Ronald Pierce said he was glad the weather held out, allowing Santa to make a safe touchdown next to the main hangar.

Santa was accompanied by Mrs. Claus and a host of helpful elves. California Pinups for Patriots assisted Santa with the formation of a line, making sure all the kids got a turn to visit with Santa. CPFP has joined Minter Field for several events, and this event was a special one as they gave kids a big dose of holiday cheer.

The gates opened at 10 a.m. and a large line started to form in anticipation of his arrival. As his pilot neared, the crowd could hear the roar of the blades and see Santa waving as they circled the landing area a couple of times.

Wind from the force of the blades gave everyone a blast of air in the face as Santa exited the chopper. The children had a look of amazement in their eyes as they saw the red and white clad figure step out. 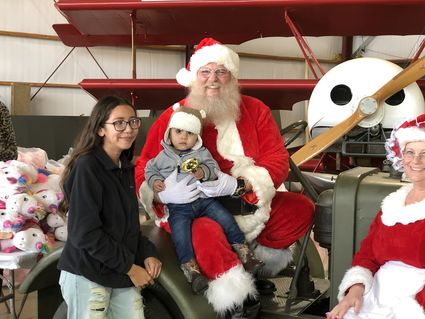 Leah and Angelo Perez were at the front of the line to see Santa.

Once set up, with Mrs. Claus by his side, Santa invited the first of many children to take a seat in the WWII-era jeep, inviting him to share what was on his wish list.

Hot chocolate and refreshments were available to keep attendees warm. Every child received a visit with Santa, as well as a stuffed animal. The stuffed animals were courtesy of PetSmart, who donated over 200 stuffed animals to the museum.

The event also gave attendees a chance to peruse the museum. The museum offers a great amount of memorabilia pertaining to every conflict the U.S. military has been a part of.

"I haven't been to the museum in two years. I can't believe how much more stuff they have than when I was here last. This is wonderful," said Arnold Marquez, who attended the event with his two boys, Jose and Enrique. "I am having fun spending time with my boys."