Loved ones remembered at service 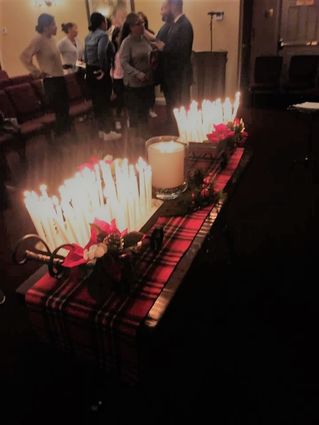 Candles were lit for those who had passed away.

In years past, it was hard to get a seat for the event, with the venue filling up quickly, well before start time of the program. This year, there was a performance for the kindergarten to third graders at 8:30 a.m., with a separate performance for the fourth through sixth graders at 9:30 a.m. This alleviated the crowds and gave everyone a chance to enjoy the performances.

The kindergarten classes united for a rousing rendition of "Santa Claus is Coming to Town," complete with choreography.

The first-grade class told the audience in their number that the late night visitor "Must Be Santa."

"Jingle Bell Rock" was the choice for the second-graders, giving the crowd a chance to sing along. There were also props, such as posters with the different traits of Santa, including "a beard of white" and a "cherry nose."

Sho Orgwean's class did a song and dance to an upbeat version of "Jingle Bells." The third-graders closed out the first performance with a bilingual rendition of "The Night Before Christmas."

The third-grade class told the crowd "I Want an Alien for Christmas."

As parents started filing in for the second performance, students gathered to take their turn on the stage. Orgwean's class did an encore performance of "Jingle Bells," to the delight of the crowd. This performance was followed by the fourth-graders singing the praises of "Hot Chocolate." 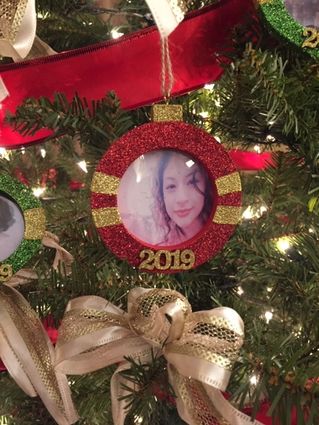 Ornaments, this one for Eleine Soriano, were placed on the tree.

A hip-hop number was on tap next, as the fifth-grade class performed "Celebrate His Birthday." This number let the kids show off their dance skills, as all of the students took turns showing off some moves. The song featured a hip-hop Santa that led a group of dancers in the song.

Brian Jacobs and Candie Springer's class concluded the program with a performance of "Jingle Bell Rock."

This number featured break dancing, the running man, tumbling and a lot of other dance moves.

The school staff also provided the parents hot chocolate, coffee, and donuts at the event. Principal Frank Florez said that he appreciated the parents and friends attending the event, supporting their students and see the result of their weeks of hard work.