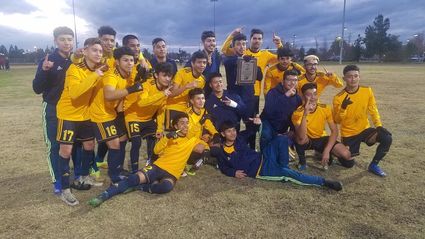 The Shafter High School soccer team took down some heavyweights in the Central Valley soccer world on its way to the championship of the Liberty tournament. This tourney draws some of the top soccer teams in the area, including past Valley champions Centennial, Stockdale and Foothill, who won the Division III championship last year.

The Generals, led by Coach Jorge Maldonado, went undefeated in the December tournament, outscoring opponents 14-3 over its four matches.

According to Maldonado, this team plays a great brand of team soccer, with the defenders making it difficult on the opposing team, limiting their scoring opportunities, while giving the ball to the offense in great position. Maldonado said that he doesn't even keep track most of the time of individual statistics, focusing more on the results on the scoreboard. "It doesn't matter who puts the ball in the net because each player, offense and defense, has to do their jobs for there to be a scoring chance."

The Generals opened up the tourney with a dominating victory over Centennial, 4-0. The Goldenhawks are perennial contenders in Division I in the Valley playoffs. They followed that win with another shutout, this one against the Mustangs of Stockdale, who have won a couple of championships in Division I and II.

The Bakersfield High Drillers were the Generals next opponents in the semifinals. The Generals gave up their first goals of the tournament, but still beat BHS, 4-2.

In the championship match, Shafter took on the Trojans of Foothill High School. The Trojans won the Valley championship in Division III last year, making it the third year in a row that they had made it to at least the semifinals of the Valley tournament.

The two teams were locked in a battle of tough defenses, with the scoring opportunities scarce. At the end of regulation, the score was knotted at 1-1. It stayed 1-1 through the overtime period as well. The Generals took home the championship when they outscored the Trojans 4-3 in a shootout of penalty kicks.

Shafter has an overall record of 6-1-2, with the lone loss a 1-0 defeat at the hands of SSL and Division III powerhouse Arvin. This is not a senior-rich team, looking for that magical season to go out on either. Maldonado said that the Generals have a freshman and three sophomores that start for the team, seeing a lot of playing time. "This team is a great mix of veterans, as well as young guys who have experience in game situations. We have a senior, Jose Sanchez, who leads the team, but this really is a complete team."

Shafter will be back in action when they return from the vacation break with a road match at Kennedy High School, then returning on Jan. 15 for a match with rival Wasco Tigers.