'Aviator' author to speak at dinner 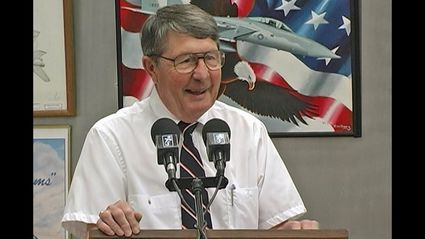 The author of the book behind the movie "The Aviator" will highlight this year's Minter Field Air Museum Founder's Day Banquet next month.

George Marrett is a former test pilot who has written four books on his exploits in the air, as well as his life dealing with Howard Hughes. Marrett wrote the book [BEGIN ITAL]The Aviator,[END ITAL] on which the 2004 movie "Aviator," starring Leonardo DiCaprio, was based,.

In past years, the event has drawn such speakers as generals, nationally known authors, and pilots. Last year's speaker was Major Rachel Winiecki, the first female F35 test pilot stationed at Edwards Air Force Base.

Marrett was selected to attend the U.S. Air Force Test Pilot School at Edwards Air Force Base. After graduating in 1959, he went on to further his education at Edwards, testing the McDonnell F-4C Phantom. Marrett flew during the heyday of flight testing when many aviation records were set, such as Col. Robert "Silver Fox" Stephens' world speed record in the YF-12. He completed 188 combat missions with over 600 combat hours and was awarded the Distinguished Flying Cross and the Air Medal.

Marrett began his literary career by sending in short stories to magazines. He has had 19 articles published in aviation magazines about military test flight and his experiences in Vietnam.

Marrett then became a test pilot for Howard Hughes, which allowed him to be involved in the day-to-day operations of Hughes' life.

Minter Field Air Museum Director Ronald Pierce said Marrett will discuss his experiences with Hughes, sharing details from the life of the billionaire recluse and experiments in aviation. "He will be giving us a great look at the inside workings of this famous man. He will also be telling of the process he went through when writing the books."