Below state averages – 'We have work to do' 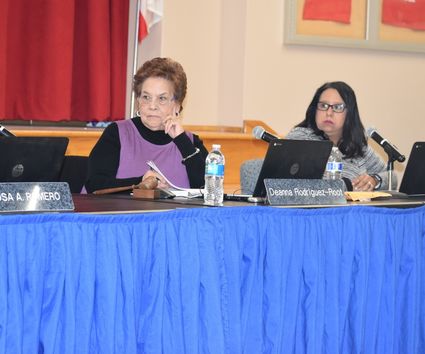 Richland students are improving overall, but still are testing below state averages in every category, according to the latest scores.

At the recent Richland School District board meeting, a presentation was given on the most recent Dashboard numbers for the district when it comes to classroom performance.

English Learners categorizes those students for which English is not a first languages and is not the primary language used in their home.

The students in the Richland School District tested below the state average, but their scores improved from the previous year's results. In the Dashboard reports, each district receives a grade under a point system, as well as a color designation. Red signifies low performance, with yellow below average; orange is medium, with green and blue being high performance. The numbers range from a low of 1, to a high of 5.

The district as a whole received a score of 2.5, which is right in between orange and yellow. They scored below the state average, which is 3.5, but was ahead of the average of Kern County districts, which was 1.8.

The Dashboard also includes data on absenteeism and the suspension rates for each district, but Richland did not get their numbers submitted in time for them to be counted. They will be "more organized this year, and make sure they get our numbers in on time, Interim Superintendent Rosa Romero said.

Assistant Superintendent Annette Blacklock gave the presentation and commented that the reports were somewhat misleading when it came to breaking down the scores to the specific student groups. For instance, the report says that English Learners scored significantly higher than white students, with students with disabilities scoring a 1.5, whites with a score of 2.0 and Hispanics with a 2.5. Blacklock said that the total numbers do not tell the entire story.

Interim Superintendent Romero also had Diane Barnett, a data and assessment technician for the district, give a presentation on a comparison report that was done between the students in the Richland School District and the students from Grimmway Academy. Romero said that she was concerned from hearing from parents and members of the community who believed that the two districts had a very different student demographic.

The district will be revisiting the agreement between the district and Grimmway next year. Richland will have a decision to make to either keep the working relationship with Grimmway, allowing them to continue to operate within the district area or decide to terminate it.

Romero said that she thought that this report will answer some questions that people might have as for the demographics of each district. The numbers are looked at in percentages because the Richland School District had a total of 932 students tested in grades 3-5, while Grimmway Academy had 252 students in the same grades.

Grimmway's students scored substantially higher than Richland, according the Dashboard, with an overall score of 3.0. They also scored higher in every individual category measured.

But, as far as demographics, the groups are very similar. For instance, Richland has 9% of its students with disabilities, while Grimmway has 6%. As for English Learners, 86% of Richland students fall into that category, and Grimmway has 85%. The numbers are the same for the amount of socio-economically disadvantaged students, with 86% at Richland and 85% at Grimmway.

Romero also wanted to point out some facts for the board to think about before they begin contemplating changes in the Grimmway relationship.

"The reason that Grimmway is here is because of the community. The community wanted Grimmway to come to give them another option for their children."

Romero also pointed out that the opening of Grimmway resulted in a smaller class sizes, but it also meant the loss of a considerable amount of funds with the loss of students. As a result, this also may mean the loss of personnel as well.