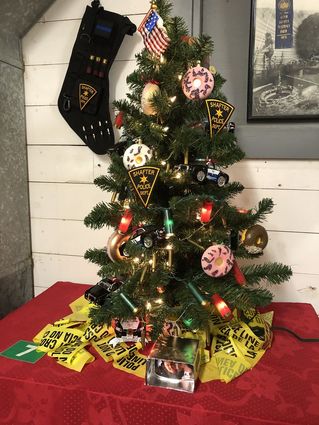 The entry from the Shafter Police Department captured first place in the contest.

A record-setting number of Christmas trees were on display for the month of December at the Shafter Depot Museum in their annual Christmas Tree decorating contest. There were 16 trees entered this year in the competition, with the theme "Lights, Camera, Christmas!"

Each tree depicted a holiday movie or scene, with a variety of titles from the competitors.

Residents were encouraged to come to the museum and vote for their favorite tree, with the top three entrants recognized at the end of the competition. The voting was busy throughout the month, with the different events going on at the museum, with the Shafter Brass Band performing, a visit from Santa Claus and a remembrance of Pearl Harbor, with a couple of vintage jeeps on display.

After all of the voting was done, the Shafter Police Department came out on top, with their tree filled with ornaments that included bullets, donuts, badges and police cars. They also used police caution tape as a tree skirt to round out the display. 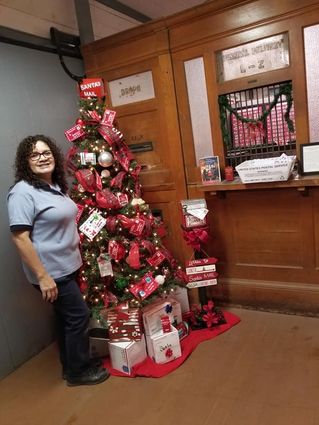 Annette Gomez Espinoza from the Shafter Post Office with their second-place entry, "Letters to Santa."

A lot of people loved the tree and thought that the decorations were very creative. "It shows that it isn't who has the biggest tree, but how it is decorated," said local photographer Colleen Diltz. "I think that the ornaments and the caution tape were just so clever."

Second place went to the Shafter Post Office. Their theme was "Letters to Santa" and included bright red ribbon, a mailbox that was stuffed with letters to St. Nick and a lot of letters from children displayed on the tree.

The Shafter Press got third place with their "Frosty the Snowman" entry, which had Frosty complete with a top hat, corn-cob pipe, long nose and, of course, a satchel of newspapers announcing his arrival.

According to Stan Wilson, director of the museum, this was the most trees that they have ever had in the competition.