Where 2- and 4-legged citizens are served 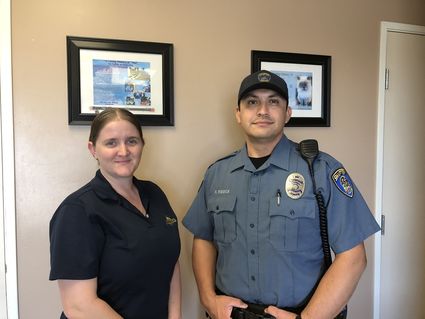 Animal Control Officer Nick Riddick with Animal Shelter Services Worker Karlina Gomez. Gomez was a volunteer for five years before being hired on to the department this past year.

Shafter Animal Control offers a variety of services to the residents, including picking up stray animals, enforcing animal laws in the city and investigating of animal cruelty or neglect, as well as educating the public on the laws and responsibilities of being a pet owner.

Riddick was born and raised in Fresno and attended the University of California, Riverside, leaving for a supervisor position at a Fortune 500 company. But Riddick found his way back to the San Joaquin Valley to Shafter, where he found his calling in the animal control field.

The challenges of operating the Animal Control Department are great, with the efforts made in controlling the stray animal population here in Shafter, as well as helping unite residents with their new companions.

Riddick said that the breeds of dogs here, as well as areas throughout the state, go in cycles. A few years ago, chihuahuas seemed to be the most abundant dog in the shelters, with thousands needing for new homes.

Today, Riddick said that they are inundated with huskies, shepherds and shepherd mixes at the shelter. "I like to think that the decrease in chihuahuas is a result of more responsible pet ownership, making sure their animals are being spayed and neutered," commented Riddick. With the huskies, Riddick suggested that one reason they are seeing a great number of them is the popularity in today's culture for the animal, as well as its propensity to wander. "They really are escape artists, able to get out of a yard when they are wanting to escape." Riddick said that they are beautiful animals, but are not fit for some households. "They are very active dogs who need a lot of attention and activities to keep them busy. This is one reason why I encourage prospective pet owners to do some research on what breed of dog would be best for their family."

Riddick said that a dog such as a husky needs a family that is very active, is outdoors often, walking or doing physical activities that will keep the dog engaged. If the animal gets bored, Riddick said that it has a tendency to venture out.

The Animal Shelter in Shafter is home to a large number of dogs at any one time, with the majority of them strays or animals who are owner-surrendered. "The animals we receive go through a series of tests to make sure they are not aggressive towards humans or other animals, as well as a physical exam to make sure the animal is healthy before they are made available for adoption."

With foster programs the rage in some cities, Riddick was asked about any foster program here in Shafter. "We don't have a full program for fostering, but we do use it as an alternative on a case-by-case basis. If we have a family that is interested in a foster-to-adopt period, making sure that the animal is going to be a good fit for their family, we will treat those on an individual basis."

The number one issue that Riddick stresses when talking to prospective pet owners, or current pet owners, is the need to have their pet spayed or neutered. He said that one of the top priorities of the department is to educate the public on how to be a responsible pet owner, as well as helping them in their quests to be good owners. "We offer vouchers for low-cost spay and neutering for those people who may need assistance in that area. We also have low cost vaccination and licensing clinics for city residents."

Riddick also said that it is important to have their pets licensed. This not only is the law in the city, but it also is beneficial to the owners and the department if the animal is found on the street. They will be able to tell if the animal has been vaccinated for rabies, as well as being able to identify the animal to make it easier to reunite the animal with its owner. When it comes down to it, the mission of the shelter is to reunite animals with their owners, as well as finding homes for those animals who need a safe and loving environment to live in.

Riddick encourages anyone who is interested in becoming a pet owner to contact the department at 661-746-2140, or visit their Facebook page called Shafter Critters for adoption information, or visit the shelter at 18849 Shafter Ave. Their hours are Monday through Saturday, 9 to 3 p.m., except on Wednesdays, when the hours are 1 to 7p.m.

The cost of adopting a dog is $75, and it is $40 to adopt a cat. The licensing fee for a year in the city of Shafter is $15 for an altered dog or cat, and $40 for an animal that is natural or unaltered.