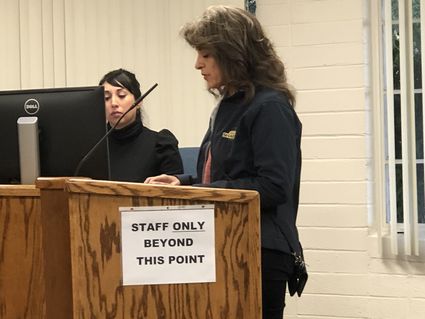 Former City Clerk Christine Wilson addresses the Council about the transparency of the hiring process.

City residents voiced concerns about the hiring process for a new city manager at a special meeting of the City Council Tuesday morning – then the council went into closed session to interview seven candidates for the job.

The day began at 7:30 a.m. with the special council meeting at City Hall. Residents were given a chance to voice any concerns they may have had. It was then on to Closed Session where the Council interviewed seven candidates for the position of City Manager.

During the Public Comment portion of the meeting, local resident and former City Council member Woody Colvard asked the council what the process was going to entail and how much the public will be informed along the way.

City Attorney Marco Martinez said that the candidates would be interviewed and the list of candidates might be narrowed down and perhaps a second round of interviews may take place. He also said that any discussions made in closed session would be confidential. "We will not be giving any names to the public. This is to protect the privacy of the candidates, who may still be employed by a different city or company at the moment."

Christine Wilson, a former city clerk, questioned the transparency of the procedure. She asked the council if all of the candidates were qualified and met the minimum prerequisites that the city had advertised.

Wilson suggested that this was not the case. "The rumor mill has been running, and it is out there that there may be a candidate being considered that does not meet the qualifications but has a personal relationship with at least one of the council members," she said.

"I would hope that if this is the case, and a candidate is being considered because of some sort of bias, that that councilmember would recuse himself from the process and not be involved in the selection process."

In question were the qualifications of "an ideal candidate" that was published in the brochure that was created for the job search. Some of the ideal qualifications include "a solid track record leading and successfully managing municipal service initiatives in areas of urban planning, financial and fiscal management, community development, agency administration and staff development."

The list also includes "a strong understanding of municipal government, the charter city process, and someone able to lead staff in successful project completion while following through on the direction of the city's policy makers."

After the meeting was closed, the council spent the majority of the day interviewing candidates. All councilmembers were in the session, except Mayor Pro-Tem Cesar Lopez, who had advised the council he would not be able to attend.

At the evening meeting, the council cancelled the closed session that was originally scheduled to take place.

During the Public Comment portion of the meeting, Christine Wilson was again in attendance and asked if there was any timeline on the hiring a new city manager. City Attorney Martinez responded, "There were a round of interviews earlier today. We will be having a second round of interview,s and there will not be anything to report until a contract is ready to be voted on in open session at a future [Council] meeting."

Martinez said that action will be taken "sometime in February."

Martinez went on to say that the public will not know the name of the new city manager until the voting takes place in open session on a new contract to be approved.

In other business, the council approved Marco Martinez as the new City Attorney. This action became necessary with the announcement that its City Attorney, Stephen Deitsch, will be going into semiretirement. 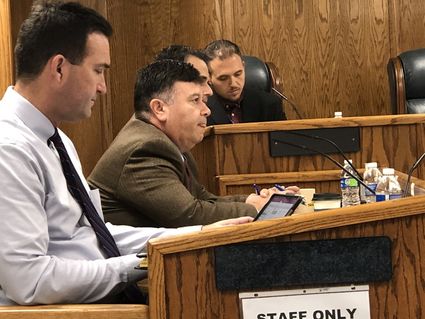 City Attorney Marco Martinez answers concerns brought up by the residents of Shafter.

Martinez has been involved in the city's operations extensively for the past few months and is very familiar with the workings of the city and has a great relationship with the staff, according to Acting City Manager Jim Zervis. The vote was unanimous in favor of the action.

Miller said that the national AmVets organization informed him that if the membership did not grow that the local chapter is in danger of being shut down. "This is the last veterans group left in Shafter. I would hate to see it end," Miller said.

The group is in need of at least five new members to meet the national organization's requirements. Anyone interested can contact Miller at 661-477-9261.