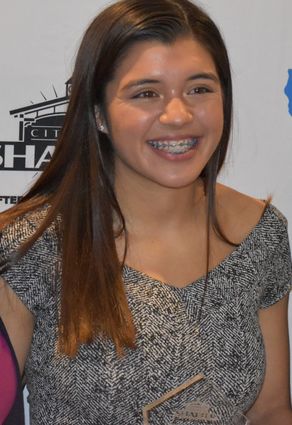 Priscilla Barajas received the Student of the Year Award.

The Shafter Chamber of Commerce held their annual Community Awards Banquet for the 72nd year last Thursday night, honoring those in our community who have made an impact. Nominees are selected for their contributions in the past year or their lifetime contributions to the city.

Debbie Haley was the mistress of ceremonies for the event, which was held for the second year at Shafter's Ford Theater. The evening began with a silent auction and social hour. Gift baskets up for bid included a City of Shafter basket, complete with a Shafter T-Shirt, coffee mugs, glasses and assorted locally grown nuts, and a fireside package with including a fire pit, makings for Smores, chips and hot cocoa.

The dinner, accompanied by a no-host bar, was catered by Hodel's, with beef, chicken, salad and mashed potatoes on the menu.

Twelve awards recognized businesses and individuals that have made an impact on the city.

The Agriculture Award was accepted by Joe Lane of The Garlic Company. The business has grown into one of the biggest of its kind in the United States, selling over 40 million pounds of garlic nationwide last year.

The company was started by Lane and John Layous, who became acquainted while attending the same college. They worked for different garlic companies and built a friendship over the years and decided to create their own business together. They farm thousands of acres, from California to Oregon. They operate a 35-acre facility here, offering year-round shipping of whole bulb, peeled and industrial garlic products to major retail, food service and industrial companies. They are a support the agriculture community by providing 180 full-time jobs locally, and over 450 jobs during peak season.

There were several education-related awards given out this year. One of those was the Education Support Staff Award, which went to Sherry Belluomini. Belluomini is a speech pathologist for the Richland School District and has been for the past 20 years.

Belluomini decided to go back to school at age 30 with the hope of learning sign language. She earned a masters degree in Communicative Science and Disorders from Fresno State University. She has been at Sequoia Elementary School for 10 years and is loved by her students and their parents. Her love for her students is evident and is seen daily by the way she relates to them.

Receiving the Education Award for 2019 was Rosa Romero. Romero is serving as interim superintendent for the Richland School District and has been working for Richland for the last 32 years. She has been a classroom teacher, assistant principal, elementary and junior high principal, director of student and family services, as well as director of curriculum and instruction.

Romero commented that she has done just about everything at Richland but drive a bus. "But that is next on my list and am looking forward to getting behind the wheel in the near future!"

Russell Shipley, principal at Shafter High School, received the Leadership Award. Shipley began his career at Shafter High as a chemistry teacher. He transitioned to dean of students at Frontier High and was then named the assistant principal of instruction at North High School before returning to Shafter High.

Since his return, Shipley has had a substantial impact at the school. He has implemented numerous programs, such as Early College program with Bakersfield College, Project Lead the Way lab and classrooms, a state of the art weight room and, beginning construction this summer, a new modern stadium.

The cafeteria staff of Redwood Elementary and Richland Junior High was given a Special Recycle Award for its work in reducing the amount of waste produced. They start their days ensuring all meals are packed and ready for students. They serve about 1,800 lunches in a two-hour period. Along with American Refuse, they put together a program to help divert their organic waste and recyclable materials away from the landfill.

The Shafter Cinco de Mayo Committee received the Arts Group Award. Founded by Deanna Rodriguez-Root and her husband, Albert "Roy" Root, the festival's mission was to bring the community of Shafter together through cultural celebration and to commemorate the Mexican Army's victory over the French Empire at the Battle of Puebla in 1862.

After Roy passed away, their daughter, Brandi, stepped in and helped her mother continue the festival in his memory. The committee works hard to raise the required funding to finance the event. Root said. "It is due to the generosity of the Shafter community, as well as the tireless work of the committee that makes this event such as special one. We draw people from all over the state, as well as attendees from as far away as Los Angeles and Phoenix."

She said that it has become a true destination and important date on families' calendars. They meet up to celebrate the holiday, as well as see old friends and family.

The Platinum Sponsor for the event, California Resources Corporation, highlighted the Student of the Year. This award went to Shafter High senior Priscilla Barajas. Priscilla's achievements are notable: She is taking AP courses, honors classes and GATE classes. She has maintained a 4.0+ GPA and in every sport she has participated in she has been named the Most Scholarly. She is a member of the California Scholarship Federation, as well as being a part of the Latinas Leaders of Kern County. Priscilla participates in soccer, track and cross country, too.

She and her family came to Shafter from Mexico, not knowing the language and culture. She had a great example of a good work ethic from her mother, who worked countless hours in the agricultural fields, supporting Priscilla in her quest for a better life. Because of this, Priscilla understands the importance of achieving a higher education.

Carrington House received the Business Award for 2019. Carrington of Shafter works alongside the community, striving to make their facility a loving, trusting, fun and homelike environment.

Each year they recruit Shafter High students as volunteers. Some of these have been hired for jobs after graduation. These former students have become some of the best resident care aides, Carrington staff says.

Carrington focuses on emphasizing the importance of learning by working around school schedules so their employees can further their education. Each year, Carrington invites local schools and churches to sing to their residents during the holidays. Carrington residents have also gone to the Fire Department, Police Department and Hall Ambulance, bringing lunch and snacks to the first responders of Shafter.

The residents of Carrington, through their Activity Department, give back to the community by putting together Thanksgiving food baskets and toy drives for needy families.

"We strive to make our residents stay with us a great one. We are not just a business, but we are a real home for them," says Director Kimberly McAnally,

The Young Person of the Year award went to Shafter High senior Jackson Sanchez. Sanchez has a GPA that is over 3.8, and he is active in and out of the classroom. Sanchez has been on the Generals varsity football team for the past three years, leading them this past year as quarterback, into the Central Valley Section playoffs.

Sanchez leads by example, as he aspires to be the best that he can be at all times. This means starting his day at 5:45 a.m. in the gym, leading and mentoring his peers. He carries a full class load and is currently enrolled in AP college prep courses.

He also is Associated Student Body president, leading students in rallies and being the face of the school. He competes in football, basketball and track. According to his teachers, Sanchez handles himself with a class and selflessness that is unlike many young men, making him a truly outstanding young person.

Sharon Wiebe received the Young Person Development Award. Wiebe has been the face of the Distinguished Young Woman competition, formerly known as the Junior Miss program in Shafter, for the past 25 years.

In 1993, Wiebe was helping some friends with the Wasco Rose Queen Pageant. Kay Milwee was also helping Wasco at the time with their choreography when she met Sharon. Milwee then asked Wiebe if she would be interested in helping with the Shafter program.

Wiebe then began dedicating her time to the young women of Shafter. Sharon and her committee of volunteers have worked to grow the program, which combines the chance to win college scholarships along with life skills training, public speaking and building self-confidence. Wiebe is currently director of the program, and also is involved in her church as a choir member, Worship Board member and the leader of a Women's Community Exercise Class for over 20 years.

John Basham partnered up with brothers Yeobani and Kevin Lara from Wasco, to open the Basham & Lara Funeral Care in Shafter in 2018. The men received the Commercial Remodel award for 2019 for their visionary work in making this facility a great addition to Shafter. They are a full service funeral home with a chapel, arrangement meeting room, visitation room, casket room, as well as a reception area that used to be the old Graddy's Lounge. These gentlemen had a vision and they chose this building that used to be a supermarket and transformed it into a perfect gathering place for families. They pride themselves on the ability to offer families an option, serving the community with outstanding and meaningful funeral services. "We have loved coming to Shafter and feel like a member of the Shafter community already," commented Basham.

The Shafter Kiwanis Club has been serving the Shafter community since 1938. They are a local community service club with thirty members. The Kiwanis received the Community Service award for 2019. Their objectives are simple: to give, to encourage, to promote, to develop, to provide, and to cooperate. The motto "WE BUILD" is the cornerstone of Kiwanis.

Each month, the club recognizes "Terrific Kids" from the local schools, giving them a special T-Shirt, pencil, and certificate as well as lunch for the students and their families. Additionally, Shafter Kiwanis Club Foundation serves the Richland Trojan Band and the Shafter High Generals Band with financial services and an avenue for fundraising through two fireworks booths in town. The Shafter Kiwanis has put on several well-known events every year, including their annual Pancake Breakfast, New Teachers Luncheon, Easter Sunrise Service, and the Circus at Mannel Park. 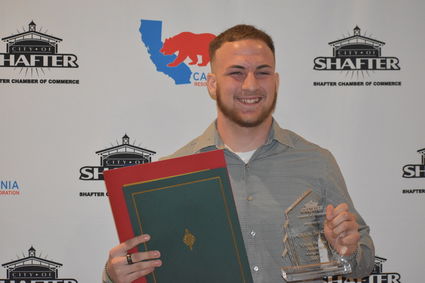 Jackson Sanchez was named Young Person of the Year.

All of the honorees were spotlighted as they came up on stage to receive their awards. There to greet them was the Mayor of Shafter, Gilbert Alvarado, representatives from Melissa Hurtado's office and Congressman TJ Cox's office, as well as Supervisor of District 4, David Couch.