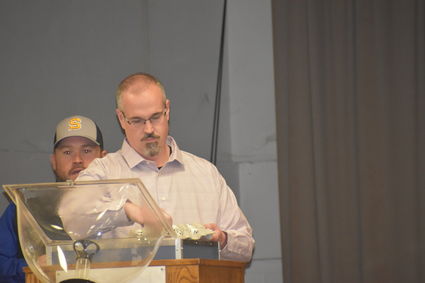 SHS Athletic Director Brian Feaster, one of the organizers of the event, prepares the ball bin for the drawing.

The Shafter High School Booster Club held their annual Reverse Drawing and Dinner on Saturday night, raising funds that will benefit the Athletic Department at Shafter High School. Headed by Brian Feaster, athletic director at the school, and Mindy Sanchez, the event drew a crowd eager for a chance at some big money.

The evening kicked off with a social hour complete with a bar. Attendees mingled and viewed the different auction items up for bid. The silent auction portion included a variety of prizes, from a gift basket for that four-legged family member, to a gas barbecue and grill. In addition, there were several gift baskets, some with Shafter High School items included and one with a metal block "S" that would find its way to someone's wall before the end of the night.

A Shafter High framed football jersey was also included in the auction.

A steak dinner with all of the trimmings was served as the guests prepared for the highlight of the evening – the reverse drawing. This event had over 215 entrants, each getting a number.

Numbers were drawn and the last number called earned the grand prize jackpot of $5,000. 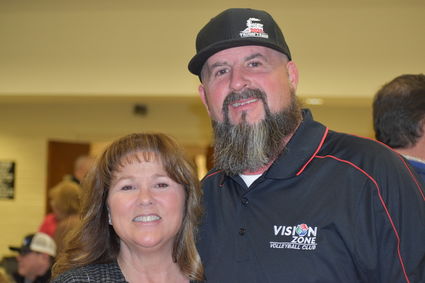 Curtis and Sherry Knapp take time for a picture before dinner is served.

As numbers were called and the tension ramped up, the drawing came down to the final five entrants. To guarantee themselves a nice piece of the pot, the final five decided to split the $5,000, each receiving $1,000.

The Booster Club helps the high school by raising money for extracurricular activities and sports. This event is just one of many events put on by the organization. Other events include a clay shoot, a poker tournament and a golf tournament. If you are interested in getting involved in the club, contact Brian Feaster at [email protected]