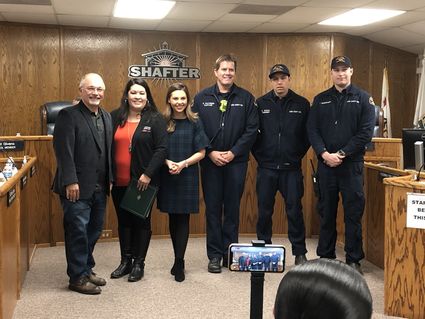 The City Council are in the final stages of hiring a new city manager.

They met in closed session after Tuesday's regular meeting on negotiations with a candidate for the position left open after Scott Hurlbert's controversial resignation last year.

A special council meeting had been held last week, with the purpose of a second round of interviews with candidates for the position.

City Attorney Marco Martinez told attendees at a council meeting last month that a sign that the council had decided on a candidate would be that specific item.

Martinez said Tuesday there would be nothing to report after the meeting, and council members would not comment on the content of the meeting.

The Safe Surrender program allows anyone to surrender their newborn baby within 72 hours of its birth to any hospital or fire department in Kern County with no questions asked and no repercussions. This movement has resulted in 77 babies being safely surrendered in Kern County since its inception.

The Safe Surrender Law was created in 2001 and was signed into law in 2006. The law was in response to the growing number of deaths of babies being abandoned in unsafe locations.

The council also okayed an authorization of the interim city manager to accept bids on work to be done at the new City Yard location at 720 Commerce Way, property formerly owned by Global Fabricators.

According to Public Works Director Michael James, the next step into the move is the relocation of the Fleet Services shop. There are already existing shops and buildings on the site, with the building in question needing to four walls installed, as well as more improvements to make it suitable to house the Fleet Vehicle Maintenance Shop. The estimated cost for the renovation is about $130,000.

The council also approved $50,000 that will be used to move Dial A Ride charging stations to the new City Yard. There is already an existing concrete pad that can house the stations. There will need to be improvements, including a railing up and down the ramp and pad, as well as the installation of the charging station.

Also at the meeting, a Shafter High student, Maline Camacho, asked for ideas for a community improvement project. Her Gold Award in the Girl Scouts requires designing a project that will benefit the community. She will need to document her work and turn in a report on the project upon its completion

In the past, Gold Award projects have included the construction and installation of park benches and recycling programs that help the community clean up the city and environment. Camacho asked for suggestions on the needs of the community and wanted to find a project that would benefit the community and enable her to receive the award.

Mayor Gilbert Alvarado said that city departments would be contacted and asked for their ideas for a project.