Generals in hunt for SSL titles 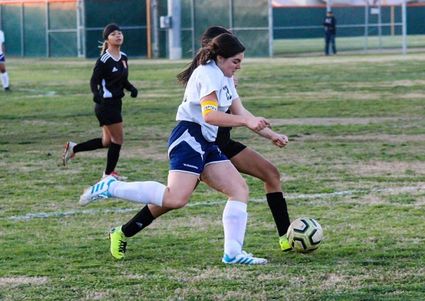 Captain Carely Hazlitt fights for control of the ball against Wasco.

The Shafter Generals winter sports teams are having a great season as a school, with both boys and girls basketball and soccer teams at or near the top of their league standings.

The varsity boys basketball team has a 17-7 overall record, with a 6-2 record in the SSL. The Generals have dominated the majority of their league opponents, with wins of 20 or more points in all but three of their games.

Their only two league losses have been to Chavez High School, with a heartbreaking 48-47 home loss to the Titans last Wednesday, and a 63-51 loss at Chavez earlier in the season.

In the Arvin contest, Gabriel Iruh led the scoring with 18 points, with Tim Ramirez adding 16 points. Iruh exploded with 23 points in the McFarland game, with Ethan Gutierrez scoring 13, and Domnik Torres adding 11 points. The offense has been a balanced one for the Generals, who have had more than five players score in double digits throughout the season.

On the girls side of the court, the Lady Generals boast a 7-1 league record. Their lone loss in league play was a 45-42 loss to Taft. Shafter got revenge on the Wildcats last week when they won the rematch by a score of 44-41.

The Lady Generals have been led by the outstanding play of Monica Birrueta, who is touted as one of the elite players in the county, and a balanced attack on the offensive end of the court with Abigail Perez contributing in double digits, as well as Frenchie Santos, who is leading the team in three-point shooting.

On the defensive side, what they might lack in height, they make up for in quickness, with an effective pressure defense that limits opponents scoring chances. The Lady Generals had a tight contest with the Cougars of McFarland that saw the locals come out on top, 55-54. In that game, Perez led all scorers with 25 points, with Biruetta putting in 20, and Santos hitting for five points. With the remaining league schedule containing teams that Shafter has already beaten, the chances of a league title are good.

On the soccer field, the boys varsity team has an 11-1-2 overall record and a 8-1-1 league record. They have a 1-1 tie against Chavez on their record and their only loss was a 1-0 defeat to the Arvin Bears. The loss was very early in the season. 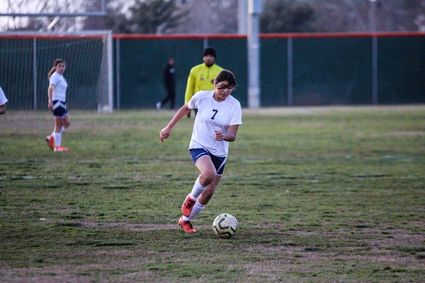 Leilani Arreloa advances the ball into the Tigers side of the field.

The Generals got payback for that loss when the Bears came to Shafter on Jan. 29, reversing the score with a 1-0 win. The rest of the SSL season has been all wins for the locals, with victories against Taft by scores of 8-2 and 4-1, McFarland, 2-0, Chavez, 2-1, rival Wasco, 2-1 and Kennedy, 5-0. This team only has two seniors starting on the squad, which bodes well for the future of the soccer program for the next couple of years also.

The Lady Generals soccer program has become one of the major forces in the county, with a 7-2 SSL record and 11-4 overall record. Their two league losses are to rival Wasco by a 2-1 score and a 4-0 loss to the Arvin Bears. Shafter split their games with Arvin this SSL season, each taking care of business on their home fields. As stated, the Bears beat Shafter 4-0 in Arvin, but the Lady Generals beat Arvin 5-1 in Shafter. In fact, Shafter is a perfect 5-0 in home games this season. All of the Shafter teams are nearing the end of their SSL seasons and are in prime position for the post season.