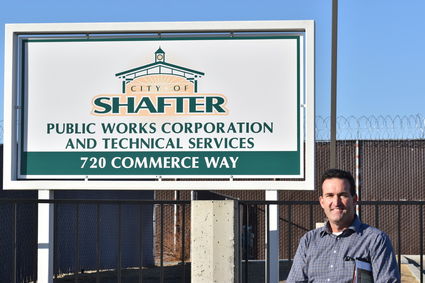 Have you ever wondered who is responsible for all of the work that is being done on the city's streets, as well as the sidewalks and buildings in town? The answer is the Shafter Public Works Department.

Director Michael James and his department are responsible for all of the infrastructure in the city, guided by the recommendations of the City Council.

The latest example of their work is the major project just finishing up on James Street. The road was repaved, as well as getting all of the curbs and gutters redone. It was a time-consuming project that took about a year, including the planning and design of the project and completing the work. "We are finishing up the last of the project now, which includes putting accessible corners and sidewalks in," James said.

The majority of the project was the result of a federally funded $500,000 grant that the city received. When the James Street project was just beginning, James said that it was brought up that a grant available through Kern Council of Governments could fund the project, but it would mean going through the application process and getting authorization for the plans of the project. He said that it was worth the process and waiting to get the federal funds instead of having to fund the project directly. The result is a much-improved street that didn't cost the city a large amount of money to complete.

James said that the city likes to target at least one project a year that will be locally funded, be it road improvements or other infrastructure projects. "We have been collecting data from public input, as well as our own research, and will be putting a recommendation to the council soon regarding our next project."

One ongoing project for the department is relocating the majority of their equipment and supplies to the new City Yard, located on Commerce Way, next to the Shafter CCF facility. The city acquired 18 acres of land previously used by Global Fabricators. James said that it is a very large chunk of land, but the property is working out well for the city.

In the first phase, the city's engineers and GIS Department personnel were relocated to the new location. This move has alleviated the need for space at the City Hall buildings. They still use the City Yard on North Shafter, but will eventually be moved completely out to the new yard. The new yard is right next to the city's largest and most productive water well, and the parking lot that exists now between the correctional facility and the City Yard will have a covered parking structure installed with solar panels, which will power the well and the building.

An issue that is being addressed also is the ongoing improvements to the North Shafter area. "We are now looking at shoulder improvements options for the section of Highway 43 near Fresno Avenue to the city," said James. He said that they are working with Caltrans on finding the feasibility of the different options that are available to them to make the shoulders safer for residents as they walk into town from North Shafter.

The department is also in talks with Caltrans on the possibility of a roundabout for the intersection of Los Angeles, Santa Fe Way and Highway 43. "The area can get very congested at certain times of the day, displaying the need for something to be installed to alleviate the congestion," James said.

He said that in studies done by the department, as well as talking to different cities that have installed roundabouts, suggest that the intersection would probably benefit more from that type of intersection rather than a traffic light. He said that this project is in its infancy and would be a couple of years down the road, due to the research and designs that go into that type of project. 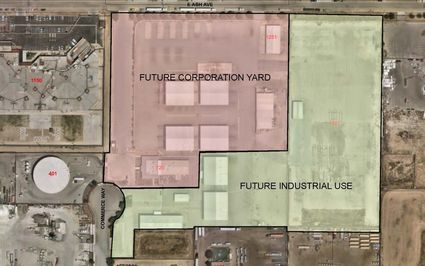 This diagram is a sample of the maps that can be accessed by going to the city's website. This map is a diagram of the new City Yard at Commerce Way.

In a move that is aimed at making the city's geographical maps and information more accessible to the public, the Geographical Information Systems Department has worked hard, led by GIS Coordinator Chris Schultz, in putting this information online. "If someone wants to know if their property is in the city limits, or want to know where different zoned areas are located, they can go to the city's website and get that information," said Schultz.

If you go to the city's website and go to City Departments, down at the bottom of the options is GIS, which is Geographical Information Systems. This tab will take you to maps and information such as what street sweeping schedule your neighborhood is on, or trash collection, as well as maps of the Gossamer Grove community, the Wonderful Logistics Park and a map of the Shafter City Core. More information is available from the Public Works Department at 661-746-5002.