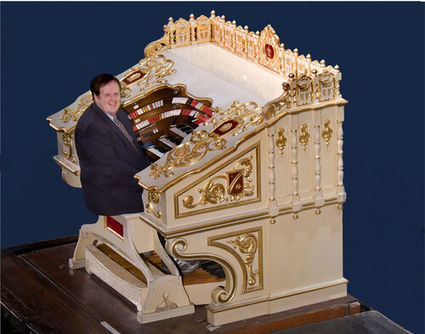 Bill Campbell has been drawing hundreds for his weekly performances at Iceland Skating Rink since 2012.

The Shafter Colours Festival is taking place later this month, hosting a variety of mediums, including music, theater, an art gallery and tours of the historic museums in town.

The festival also brings back the golden era of movies, before dialogue was an option at the cinema. Then, the story was told through physical actions, facial expressions and the accompanied organ music that set the tone for the movie and did an important part in telling the story.

The festival will have a nationally acclaimed organist that will be accompanying the silent movies being played. Bill Campbell will be supplying the music for "A Night in the Show," starring Charlie Chaplin, and "Sherlock Jr.," starring Buster Keaton. The shows will be presented at the Congregational Bible Church, 430 E. Tulare Ave., on Thursday, Feb. 20, and Saturday, Feb. 22, from 7:30 to 9 p.m.

The "Night in the Show" follows Chaplin as Mr. Pest, as her tries to find a suitable theater seat before winding up in a fight with the conductor. He is thrown out. Hilarity ensues as Chaplin has run-ins with a variety of characters including patrons, a harem dancer and a fire-eater.

"Sherlock Jr" is Keaton at his best. Keaton is a film projectionist who longs to be a detective. He gets his chance when he is framed for stealing his girlfriend's father's pocketwatch.

The films would not have nearly as much impact without the accompaniment of the organist. Campbell is currently the organist for the Paramount Iceland Skating Rink in southern California. His weekly performances draw hundreds of people.

He is an active member of the American Theater Organ Society. He started his career while still in high school in Milwaukee, playing the organ for the Avalon Theater. He was the movie organist and played weekends before some of the era's most famous films such as "The Longest Yard, "Tommy, the Exorcist" and "Titanic." His musical preludes to the movies include selections from the movies whenever possible.

When Campbell's full-time career as a computer professional changed and he moved to the West Coast, he continued to perform. These performances included stints at the Orange County Theater Organ Society in South Pasadena and the Trinity Facility in San Diego. In all of his concerts, Bill likes to present a variety of music from different time periods that reflect the music history of America.

Campbell loves performing a variety of music on the organ, but one of his first loves is the accompaniment of the silent movies. "The music helps bring the movies to life and tell a story," he says.