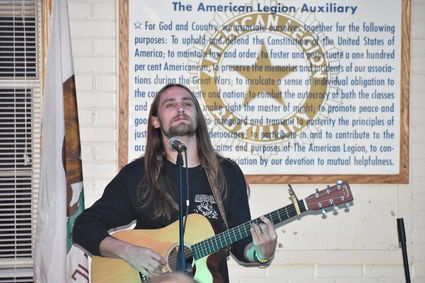 Hometown boy Devon Ford performs one of his original songs.

The music was the star at the event at Shafter Veterans Hall on Friday night as part of the Shafter Colours Festival.

Several local singers put their talents on display at the Live Music Night. There was some great music in addition to good food and drink.

One singer of note was Shafter boy Devon Ford, who was playing one of his last local performances. Ford is moving up into the mountains, limiting his performance schedule in the area.

Ford sprinkled his playlist with a couple of covers, as well as several originals. Ford writes songs about his everyday life and those he loves in it. One such song was "Q Street," a song that he said goes back to a time he was living on Q Street in Bakersfield and was with a girlfriend and was robbed of everything they had. Ford is the grandson of Gerald Ford, of Gerald Ford Trucking.

Tim Styles was on the performer's list, with songs that recalled times that saw him struggling in love and life. His voice was a great combination of a rasp and a strength that reminded you of a good blues artist.

He ended his set with a local favorite made famous by Dwight Yoakum and Buck Owens, a powerful rendition of "Streets of Bakersfield." 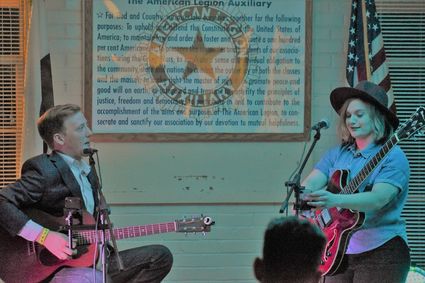 The Charlie Zanne Band offered a mix of blues and folk music.

David T8TZ gave the crowd a dose of poetic songs that had a powerful message, focusing on the. woes of addiction and the pain it causes. He also mixed the playlist with several poems, tales of heartache.

The Charlie Zanne Band had the crowd tapping their toes with songs that were written with a salute to local life. The band is actually a duo made up of Amanda McCaslin and Jake Neuman. Neuman plays the lead guitar and McCaslin does the majority of the singing and performed a couple of new songs that she had written, one of which she wrote about a homeless person that walked through a cemetery every day. The song was an eerie one that also harkened back to the times of a bluesy folk music.

This was the first year that the event was held at the Veterans Hall, which provided plenty of room for chairs to sit and floor space to get up and dance.